Rodgers and Munn watch Bucks game with Hawk and wife 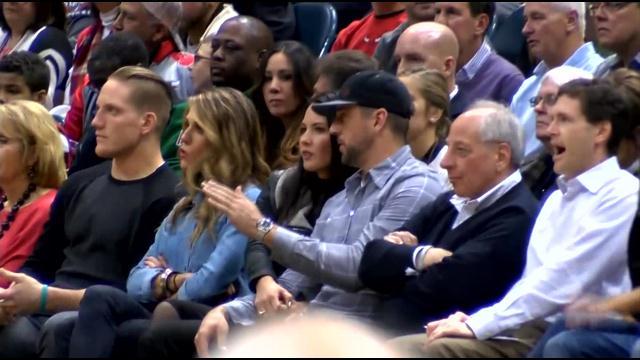 At least three Packers are spending some time in Milwaukee before their next game at Lambeau Field.

Packers quarterback Aaron Rodgers and girlfriend Olivia Munn watched the Bucks take on the Oklahoma City Thunder Tuesday night at the BMO Harris Bradley Center. They came with friends too. Packers linebacker A.J. Hawk and his wife Laura were in the seats next to Rodgers and Munn.

They all sat courtside and watched as Milwaukee grabbed its second consecutive win at home. The Bucks beat the Thunder, 85-78.

The couples were also spotted Tuesday night eating dinner at Carnevor in Downtown Milwaukee. That's the same steakhouse where Packers wide receiver Randall Cobb was earlier in the day helping to shoot a promotional video.

The owner of Carnevor, Omar Shaikh, tweeted out some pictures from the day. One shows Cobb wearing a chef's coat. Another captures Cobb in the kitchen with a big steak.

The Packers next game is Sunday, November 16th in Green Bay. The team takes on the Philadelphia Eagles.