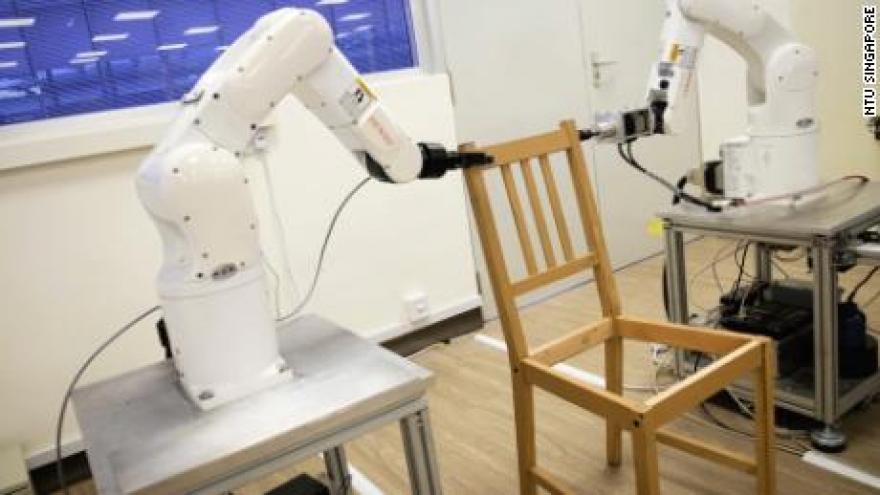 (CNN) -- A delivery of flat pack furniture can send people into a panic or reaching for the phone to call the nearest assembly service.

That may soon be a thing of the past thanks to scientists at Nanyang Technological University in Singapore who have developed a robot that can build an Ikea chair in 20 minutes.

The robot was built to manipulate objects in the same way a human would. It is equipped with its own "eyes and hands" -- a 3D camera, sensors and two robotic arms fitted with grippers allowing it to pick up objects.

The scientists bought a simple Ikea chair and placed its parts randomly around the robot, replicating the clutter humans get when unpacking a delivery.

It took the robot just three seconds to locate all the parts by taking 3D photos and generating a map of their estimated positions.

Once it knew where everything was, the robot spent 11 minutes planning its next moves. It was then able to assemble the chair in under nine minutes.

Assistant professor Pham Quang Cuong, who led the team of scientists, said that putting together an Ikea chair is more complex for a robot than it may look.

"The job of assembly, which may come naturally to humans, has to be broken down into different steps, such as identifying where the different chair parts are, the force required to grip the parts, and making sure the robotic arms move without colliding into each other," he said.

The robot put the chair together without interruption. It was able to figure out the individual moves, locate and grab the required parts, and then put them together.

However, the robot was told in advance which parts to put together first, just as humans are told what to do by the cartoon man in Ikea's assembly instructions.

"So it can learn the different steps of assembling a chair through human demonstration or by reading the instruction manual, or even from an image of the assembled product," he said.

It took the scientists three years to build and program the robot. Teaching it to control its strength was a particular challenge.

They solved the problem by mounting sensors on its wrists to help it determine the amount of force required.

The robot was built entirely from off the shelf components, which the scientists say helped keep the costs down.

The university said the team is now working on making the robot master glass bonding that could be useful in the automotive industry, and drilling holes in metal components for the aircraft manufacturing industry.