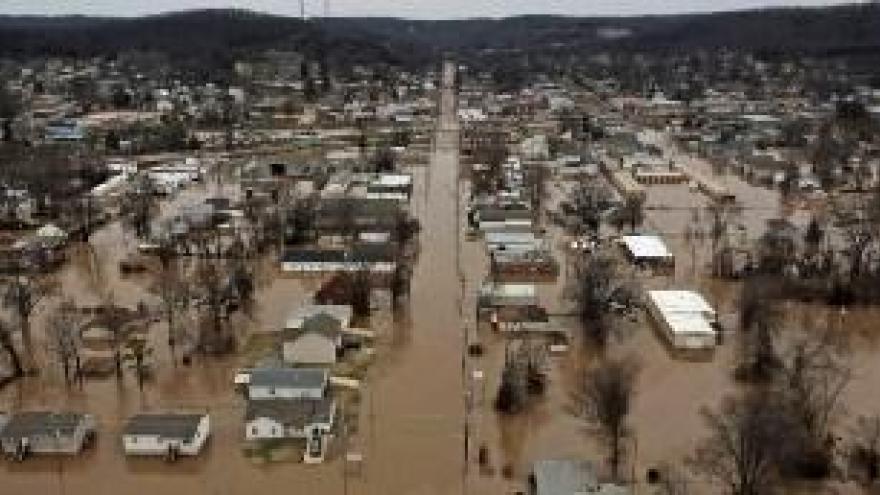 (CNN)The Mississippi River flung refrigerators, cars and tree trunks past Andrew Dallwitz as he tried to save what he could of his marina and his home in the bay of Portage des Sioux.

The river was still rising next to the Missouri town just north of St. Louis, and not expected to crest until late Thursday. And with 20 employees, he fought against torrents and heavy debris.

He has been at it since Christmas Eve, when a log rammed into a boat and sank it. "We had to pump it out Christmas Eve and Christmas Day."

The water has been freezing cold.

A week ago, bad weather spread across the country, starting with a spate of tornadoes. Then by the weekend, a deluge was dropping down over the Midwest, and floods spread. The storm clouds have long cleared out, but runoff has swelled rivers, increasing the flooding, and many have yet to crest.

In just two days, the Mississippi rose 10 feet at his marina, Dallwitz said. And it has kept on rising.The river has torn four docks loose at his business namedMy River Home. The marina's restaurant, two of Dallwitz's homes and his bar are under water. And they are built to take seasonal flooding. "My bar is 18 feet up on stilts," he said.Levees nearby were threatening to fail late Wednesday, fire officials in nearby West Alton, Missouri, warned. "If the protective measures fail, the City of Portage Sioux will be isolated in a matter of hours," it said.The river would rush around the city, turning it into an island, and cutting off road leading there, but it is high enough to be safe, Dallwitz said. The Mississippi is expected to crest at around 31 feet at Portage, and the town lies about five feet higher than that, he said.

But many places around the St. Louis are less fortunate, and water has submerged neighborhoods, schools, and shopping centers, carried off whole houses and killed 14 people in the state. In neighboring Illinois, seven people have died in flooding, CNN affiliate KMOV reported.Many of those who died drove into high water and were carried away in their cars by rushing waters.

Flooding has buried whole networks of streets in around St. Louis including 24 miles of I-44, and late Wednesday, as the Mississippi threatened to encroach, authorities began shutting down I-55.

State transportation workers fought to reopen it. "They're setting intermittent closures for our sandbagging and pumping operations," said Missouri DOT spokeswoman Marie Elliott.Dallwitz's operations manager Christie Helminger lives 25 minutes away from the marina by car in Bethalto, Illinois. Closed roads have thwarted her commute to work.

"It's been an hour and 20 minutes," she said of her commute one way. Her office has since been evacuated as the marina has flooded, and she has stayed at home.The Mississippi may crest well below its previous record that once flooded Portage des Sioux years ago, but elsewhere rivers are breaking records and swallowing towns."We've never seen water this high," Missouri Gov. Jay Nixon said. "The Meramec River is going to be 4 feet over its historic level."

At its peak, the Mississippi should be at its highest level ever, Nixon said, beating the highest level of the great flood of 1993, the benchmark for flood catastrophes in the region.

"That's why we've got a state of emergency," he said. But it is expected to drain off rapidly, so he is hopeful the cleanup phase will begin soon.

Throughout the country's midsection, from Texas to Illinois, about 400 river gauges are over flood stage, with around 45 showing major flooding, the National Weather Service said.

As the runoff from the deluges that hit around Christmas continues gathering in rivers that empty into the Mississippi River, downstream, gauges are predicting flooding in areas farther south as deep torrents roll that way in early January.If the levees around Portage des Sioux break, cornfields will flood, but that would bring some relief, Dallwitz said. Since the great flood of 1993, too many levees have popped up to protect uninhabited land, he said. "The water's got no place to go."

About 10 more marinas operate nearby, he said. And he feels certain they are fighting the same battles he is.

After watching the rushing flood waters flow right through the business, operations manager Helminger is dreading the cleanup and rebuilding. She is used to dealing with seasonal flooding, but this is different.

She expects it to look like a garbage dump of appliances, car parts and trees covered in a two-to-three-foot layer of mud.

"You would not believe what goes into a cleanup," she said. "I would rather flood than clean up after a flood."