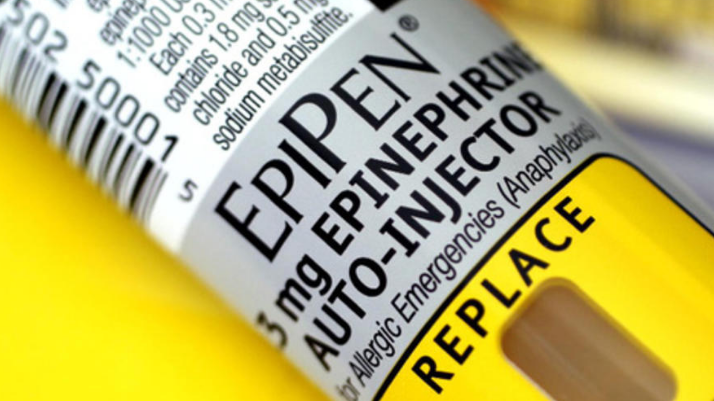 Families with severe allergies often rely on EpiPens to deliver a dose of potentially life-saving medicine if a child has a bad reaction. But the cost of the EpiPen is surging, putting the pinch on many families.

The EpiPen is filled with epinephrine, which can counter the effects of a severe allergic reaction. The auto-injector's price has risen by more than 480 percent since 2009. The actual cost of the drug inside the EpiPen is only a couple bucks, reports CBS News correspondent Vinita Nair. So the manufacturer is essentially charging hundreds of dollars for a case -- and a trusted name.

An EpiPen is never far away in the Henegar household where dinner time is a cautious time. Of the family's six children, two have severe food allergies: 3-year-old Cora and 7-year-old Ellie.

Ellie has a laundry list of foods to avoid, including dairy, wheat, soy, eggs, peanuts, tree nuts and sesame seeds. It's why both girls never leave their Indianapolis-area home without their fanny packs.

As a baby, Ellie's allergic reactions were so severe, hives covered her entire body. Her family has twice used the EpiPen to save her life.

They have to replace the injectors every year when they expire. The Henegars remember paying as little as $80 for them five or six years ago before they switched to a high-deductible health plan.

"We really noticed it in the past year, year and a half when we went to go have it filled. It was $600," Lexi said.

"When the pharmacist first told you the bill, did you think 'You must be wrong?'" Nair asked.

"I did. I had her look it up again and she didn't have to because she had answered that question many times with many other people who asked her the same question of, 'Are you sure that the EpiPen is that expensive -- and it is," Lexi said.

"If they don't have [the EpiPen], it could mean life or death," pharmacist Leon Tarasenko said.

Tarasenko said the high prices are forcing some families to take risks.

"Within the last two months, we've had about three patients who had issues with the price of an EpiPen. And we actually -- they did not receive it. They just refused to take it," Tarasenko said.

Bloomberg senior medical reporter Robert Langreth says the manufacturer of the device, Mylan, has a virtual monopoly after its main competitor launched a recall last fall.

"This brand name, EpiPen, it's like Kleenex to allergists," Langreth said. "You know, it's a name they know and trust. It's what they prescribe."

He said the company has remarketed the decades-old device without making any significant changes since acquiring it in 2007. It has spent tens of millions of dollars on TV ads and donated the device to schools across the U.S., ensuring it was a familiar product.

"It's a totally established brand name with little competition," Langreth said. "That gives them freedom to raise the price every year."

In a statement, Mylan tells CBS News the EpiPen's price "has changed over time to better reflect important product features and the value the product provides," saying "we've made a significant investment to support the device over the past years."

The company offers coupons, which have allowed many patients to pay nothing out-of-pocket. Those coupons are worth up to $100, so families with high deductibles like the Henegars are still on the hook for the majority of the cost.