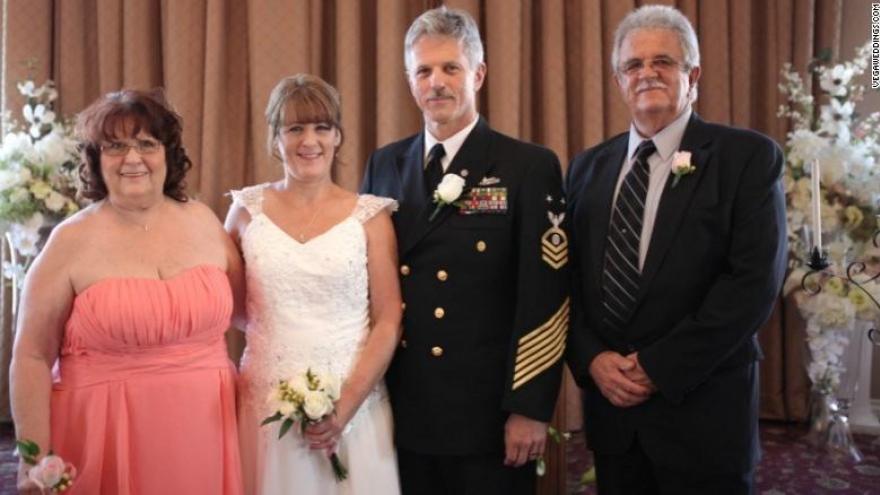 (CNN) Raymond Heiber estimates he has told this story 100 times. He'll never get tired of telling people about the forces that brought him to his soul mate at 51.

The story begins in 1969, when Raymond walked down the aisle with Helen Klinger for the first time. They were the ring bearer and flower girl in the wedding of Raymond's uncle, Ron, and Helen's oldest sister, Charlotte. Ray was about to turn 6, and Helen was 7.

After the wedding, they remained childhood playmates, meeting up at family picnics and pool parties in the coal region of Pennsylvania where they lived. But by the time they were teenagers, their lives took different directions.

Helen married young and had four children. Raymond joined the Navy, married and had a son.

Things didn't work out how either of them planned. Raymond's wife died of lung cancer after 30 years of marriage, and Helen's marriage ended in divorce.

In early 2014, they were both on their own again, living 50 miles apart in Lancaster County, Pennsylvania.

"All she wanted in her life was for someone to love her, for her," Raymond said. "And the way I was left, all I wanted was to love somebody for one more day."

That's when what they like to call the "divine conspiracy" began. Ron and Charlotte, now living in Las Vegas, traveled back to Pennsylvania in May to celebrate their 45th wedding anniversary.

Thinking of the couple, knowing they each could use a companion, Charlotte suggested Raymond give Helen a call, just to talk. He was nervous.

"He said, 'It's been years, I don't even know if she would know me anymore,' " Charlotte remembers.

You can probably guess what happened after that.

"Things just fit together -- there was no real working stuff out. The whole thing was very easy. The families knew each other, I knew her brothers, I knew her sisters, she knows my whole family and everything just worked out," Raymond said.

Helen, who says Raymond had appeared to her in a dream weeks before they reconnected, looks at the picture of him and her as ring bearer and flower girl and believes they had a spiritual connection even then. Sometimes, they wonder why they didn't get married all those years ago, but they believe God truly did have a plan.

From ring bearer and flower girl to husband and wife, 20 years later

After dating for four months, they walked down the aisle for the second time on September 14, 2014, to become husband and wife. This time, the roles were reversed: Ray's uncle carried the rings and Helen's sister carried the flowers.