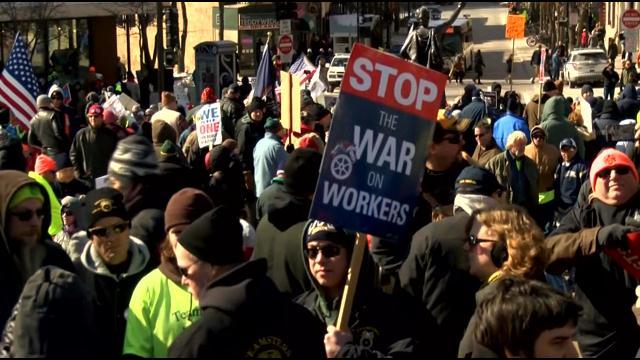 A public hearing on the proposed \"right-to-work\" legislation ended about 30 minutes early on Tuesday after officials cited a \"credible threat\" against the safety of those involved in the hearing.

Earlier in the day, an estimated 2,000 union members gathered on the capitol steps and spilled into the rotunda to make their opposition to the legislation. Union members protesting in Madison said there was no threat to disrupt the hearing, but Senator Stephen Nass called for the committee to move to executive session early because of a threat to disrupt the meeting. That threat apparently came from a Milwaukee Journal Sentinel article reporting that two groups planned to disrupt the session. The groups named were the Service Employees International Union and Milwaukee-based Voces De La Frontera.

\"There was discussion around that, but there was never in any way, shape, or form to interrupt the very beautiful and powerful testimonies that were being given today by people all over Wisconsin,\" said Christine Neumann-Ortiz, the Executive Director of Voces.

\"Our plan was to stand up and insist that people be allowed to finish their testimony,\" Bruce Colburn with the SEIU said.

CBS 58 talked with Peter Wilmarth. He was on the list to testify against right-to-work and said he's frustrated things ended the way they did.

\"I don't think chanting is going to do it. If we've learned nothing in four years with Scott Walker, we should know that it takes ideas. It takes working together, not mindless chanting,\" Wilmarth said.

\"I am deeply disappointed that Senator Nass and Republicans did not at least live up to their promise of holding the public hearing until 7:00 tonight,\" Assembly Democratic Leader Peter Barca said in a statement. \"Slamming the door on public testimony and silencing the hundreds of people who have come all day to testify is just another abuse of power by Republicans and an affront to our Wisconsin values of open, honest and transparent government.\"

Senator Chris Larson also released a statement, saying in part, “Tomorrow is the Senate's last chance to defeat this dangerous bill. Once again, I'm calling on any remaining moderate Republicans in the Senate to show some backbone and stand up for their neighbors and not cave to threats by special interest groups. This legislation puts Wisconsin in the race to the bottom. It is simply wrong for Wisconsin and we can do better.”

One protester was arrested shortly after the state capitol closed. The legislation now heads to the state Senate for a vote tomorrow. Our David Ade will have live reports on Wednesday from Madison at noon, 5, 9, and 10. You can also get real-time updates via Twitter by following @DavidAdeCBS58.