Rick Perry: Let us take our guns to the movies 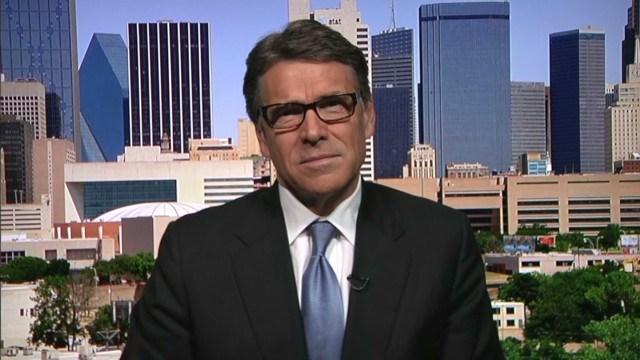 (CNN) Rick Perry said in an interview Sunday on CNN's \"State of the Union\" that the shooting in Lafayette, Louisiana, earlier this week shows why gun-free zones are \"a bad idea\" and said he believes people should be able to take their firearms to the movies.

\"I think that it makes a lot of sense to send a message across this country,\" Perry said when asked by host Jake Tapper if the former governor believed a way to prevent such violence would be to allow moviegoers to take guns inside. \"If we believe in the Second Amendment, and we believe in people's right to protect themselves and defend themselves, and their families.\"

John Russell \"Rusty\" Houser on Thursday shot 11 people, killing two, in a theater using a handgun he legally purchased from a pawn shop, authorities have said. Houser, who authorities say had a history of legal and mental problems, then turned the gun on himself.

\"I believe that, with all my heart, that if you have the citizens who are well trained, and particularly in these places that are considered to be gun-free zones, that we can stop that type of activity, or stop it before there's as many people that are impacted as what we saw in Lafayette,\" Perry said.

But Perry also said shootings in gun-free zones like movie theaters and churches -- such as the one in Charleston, South Carolina, the scene of a racially-motivated bloodbath that killed nine last month -- happen because of a failure to enforce existing gun laws. He said current laws should have prevented Houser from obtaining his gun.

\"I think we have the laws in place. Enforcement of those laws is what seems to be lacking, both in Charleston and here in Lafayette, Louisiana,\" he said. \"We see individuals who are obviously mentally impacted. These are individuals who I think that somewhere, somebody didn't do their job in the standpoint of enforcing the laws that are only on the book.\"

Trained carriers who have been vetted should have the freedom to carry guns, Perry added.