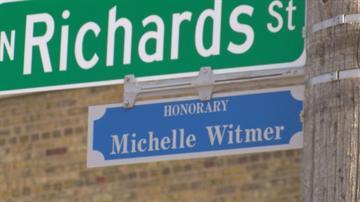 MILWAUKEE -- With the tug of a rope Sunday, Michelle Witmer's name forever became part of North Richards Street in front of the Army National Guard Armory.

\"Remember the young woman who embodied both the strength of a soldier and the heart of an angel,\" Witmer's mother Lori said.

Witmer's 32nd Military Police unit deployed to Iraq in 2003.  April 9, 2004, insurgents attacked her convoy.  Witmer was shot and killed, only about a week before she was set to come home.

\"Ten years later, I am sure, I am positive that every day you relive the good times that you spent with her that she was on this planet,\" Milwaukee Mayor Tom Barrett said.

Witmer was the first female national guard soldier ever killed in action.  Milwaukee lawmakers, family and veterans told stories about Michelle's past and the individuals she touched.

\"She loved people,\" Colonel Scott Southworth said.  \"Love is an action, not an emotion.\"

\"What she would have wanted is for people to be inspired,\" Southworth said.  \"To make a difference here in Wisconsin, in their communities, to somebody who is in need.\"

Witmer's parents read an email Michelle sent while deployed as well as a letter from one of her sisters, who also served.

\"Understanding why her name is on the sign, because she was the first woman and it represents a shift in the way we think about women in the  military,\" Witmer's father John said.

\"Every person who turns down Witmer Street, every soldier or airman who travels to the Witmer Street Armory will be reminded that they can make a  positive difference too,\" Colonel Southworth said.