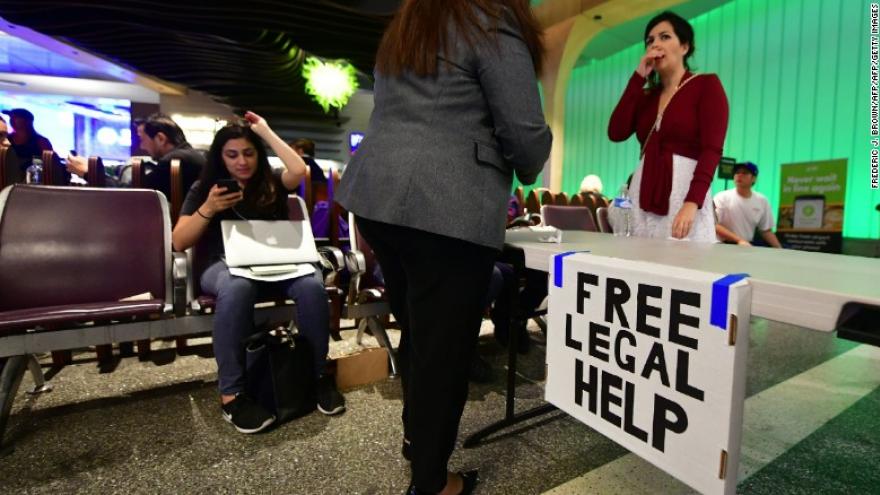 (CNN) As the revised version of President Donald Trump's travel ban went into effect Thursday night, the public reaction was muted compared with the massive protests that erupted in January.

Small groups of lawyers and volunteers gathered at the arrival terminals of major airports including Chicago, San Francisco, New York and Los Angeles.

Lawyers had signs in different languages that read: "Do you need an attorney?" and "Free Legal Services" in order to reach people who might be affected by the latest iteration of the travel ban.

At the San Francisco airport, signs were posted in the international terminal containing a phone number for people affected by the travel ban to call.

"It's a very confusing situation," Zahra Billoo, executive director of the San Francisco Bay Area branch of the Council on American-Islamic Relations told CNN affiliate KPIX. "We are here to monitor the implementation of what we call Muslim Ban 2.0 and to offer legal advice to anyone who may be affected or have questions."

Scattered protests broke out in New York's Union Square and Los Angeles International Airport (LAX) on Thursday, but they were far smaller in scale compared to the ones in January, when thousands swarmed airports around the country in reaction to Trump's rollout of the travel ban.

Outside the LAX international terminal, a small group of protesters screamed, "No Muslim ban. No border wall."

Earlier this year, the roll-out of the initial travel ban caused chaos and confusion through US airports, American law enforcement agencies and foreign countries. The ban was much more extensive, initially banning citizens from seven Muslim-majority countries for 90 days and all refugees for 120 days.

Earlier this week, the Supreme Court allowed parts of Trump's travel ban to go into effect. After months of winding through the courts, the so-called "watered-down," revised version of the travel ban encompasses six countries and refugees, but it also has a number of exceptions.

On Thursday, U.S. District Court Judge Derrick Watson ordered the Justice Department to respond by Monday to the state of Hawaii's motion to clarify the scope of the travel ban that went into effect at Thursday night. Judge Watson will grant Hawaii an opportunity to reply by July 6.

The following categories of travelers are excluded from the travel ban:

-- Foreign nationals with "bona fide" family, educational or business tie to the US.