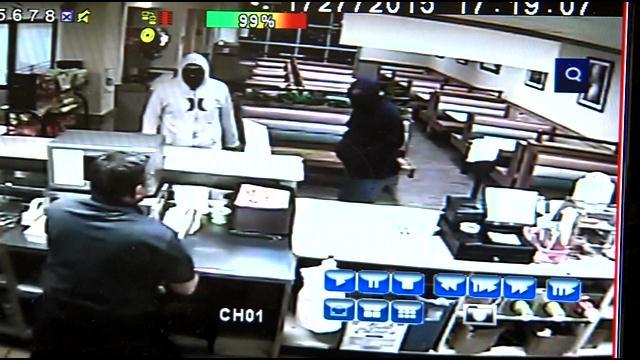 Milwaukee Police are asking the public to help identify armed robbery suspects who are accused of robbing the Speedway Gas Station at 800 E. Layton Avenue on January 25, 2015 around 11:30 p.m.

The suspects entered the store, approached the cashier, and demanded money.

The suspects implied that they had a gun but did not show one before they stole cash. They then fled from the scene on foot.

The suspects are also believed to be responsible for similar armed robberies on January 27 at the Cousins Subs at 2867 S. Kinnickinnic Avenue, on January 28 at the Speedway at 3869 S. 84th Street, and on January 30 at the McDonald's at 830 E. Potter Avenue, as well as armed robberies in outside jurisdictions.

CBS 58 spoke with the owner of the Cousins Subs on S. Kinnickinnic Avenue.

Babu Patel says he knew something was wrong the moment to the masked men walked inside his restaurant.

According to Patel, the two men walked up to the front counter, and demanded he give them the money from the register.

Instead, Patel took action and fought back by swinging his bat.

\"I say ok, just a second. I look like this. He says don't move. He looks at that person. So I throw the baseball bat this way', said Babu Patel.