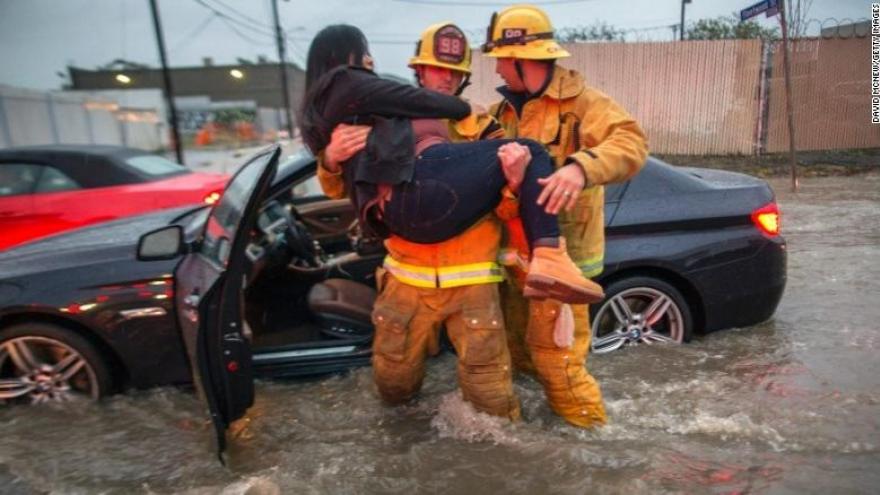 San Francisco (CNN) — About 500 residents of a Northern California community were under evacuation orders after a river levee became damaged amid rising water levels and pounding storms.

Crews were able to stop the breach on the river levee by 8:45 p.m. Monday, but the evacuation order remained in place, according to the San Joaquin County Office of Emergency Services.

The breach was found on the eastern side of the San Joaquin River, south of Manteca. The evacuation order was issued around 7:30 p.m., affecting areas mostly of farms and ranches.

Crews have since made "impressive progress on filling in the levee gap" but have retained the evacuation order to determine when it's "completely safe to return to the area," according to an update on the Manteca Fire Chief's Foundation Facebook page.

Heavy rains pounded parts of Northern and central California through Monday, putting more than 14 million people under a flood warning or flash-flood watch.

Storms are expected to last into Tuesday, according to CNN meteorologists.

The rainfall has filled up already-swollen creeks and rivers, and knocked power out in areas such as Monterey County. In Salinas, south of San Francisco, some evacuating residents had to be rescued by boat Monday, CNN affiliate KSBW-TV reported. Voluntary evacuations were issued for Rio Linda, in Sacramento County, amid flood warnings.

California is getting pummeled by storms this season after five years of drought.

The National Weather Service in the Bay Area tweeted that San Francisco had surpassed its entire water year average -- 23.65 inches -- in about five months. As of Monday, San Francisco had received 24.5 inches of rain.