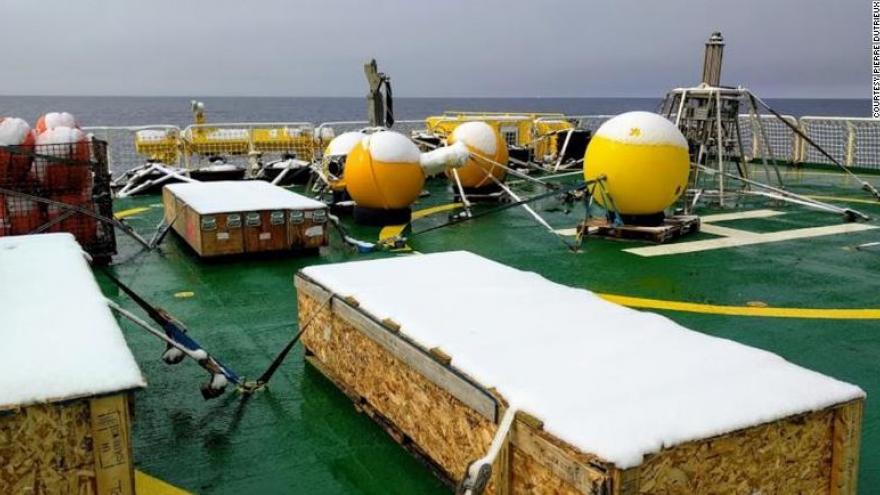 Scientists with the University of Washington in conjunction with Paul G. Allen Philanthropies are sending robots to Antarctica for as long as a year in what will be the longest mission ever undertaken in the region.

The autonomous underwater gliders move by changing their buoyancy, rising to the surface to transmit data, and that comes with a risk -- some may sink and be lost for good as they move under the Antarctic ice sheets.

It's a small price to pay when talking about the fate of the world, according to a spokesman for Microsoft co-founder and investor Paul Allen, who has funded the mission.

"We think the risk-reward ratio, the value of the data we collect, far exceeds the risk," said Spencer Reeder, a spokesman and director of climate and energy at Paul G. Allen Philanthropies.

"This is really a pathbreaking scientific endeavor."

An icebreaker just arrived this month in Antarctica via New Zealand carrying the robots to be deployed.

The gliders' batteries should last at least a year, and it's hoped they won't go missing in ice caves as they venture into the unknown.

"It's really an important data gap for the scientific community," Reeder said. "We're taking a big risk by going into a complex terrain."

Pierre Dutrieux and Jason Gobat are scientists on board the icebreaker pioneering data collection.

A robot is "periodically taking samples of salinity and temperature, oxygen and some optical properties of the water," Gobat said.

The University of Washington team plans to focus on Pine Island Glacier in West Antarctica, the continent's fastest-melting ice sheet, where a huge iceberg broke off last year.

"Results go back by satellite to the University of Washington (to be reviewed) ... because we won't have any internet at all once we're down there," Gobat added.

Ice sheets play a crucial role in maintaining sea levels. The amount of ice loss from the West Antarctic Ice Sheet has accelerated, increasing by 70% in the past decade, according to research published in the journal Science.

While the ice sheet in East Antarctica is gaining in mass because of increased precipitation, it is nowhere near equal to the loss experienced in the West, according to the Climate Institute.

How much it will melt in the future is anyone's guess. Scientific projections for sea level rise by 2100 vary from 30 centimeters (1 foot) to well over 200 centimeters (7 feet).

In 2016, researchers with NASA's Jet Propulsion Laboratory reported that the ice in West Antarctica was melting faster than previously thought. Their findings, published in the journal Nature Communications, said increased circulation of warm water beneath the ice shelf was likely the main contributor to ice loss in the region.

Research on ice melt is limited. It's only since 1990 that scientists have started to gain understanding on whether the polar land ice was growing, shrinking or in balance.

Craig Lee, an oceanographer at the University of Washington's Applied Physics Laboratory, said past missions to study ice loss have been restricted by time and cost.

"The only way to make measurements has typically been to drill a hole through the ice sheet, which is very expensive and difficult to do, or to take a large submarine, and both of those things really only allow you to be there for a span of days or weeks. They're expensive to do, and you can only be there for a short period of time," Lee said.

Cavities underneath the ice sheets are some of the most remote environments on Earth, he said.

"They are one of the last unexplored places on the planet, very difficult to get to. We don't understand the geometries of (those) cavities. If you're using drones, you can stand off from the dangerous part of the ice sheet and send the drones in to do the work," he said.

2017 was one of the hottest years on record, according to NASA and the National Oceanic and Atmospheric Administration, and the six hottest years have all happened since 2010.

Reeder said events in the West Antarctic will play a big role in future predictions for sea-level rise.

The robots will undergo several days of tuning before being deployed. The initial mission will look at the inflows and outflows at the front of the West Antarctic Ice Sheet.

"This will allow us for the first time ever to create sustained observations from this interaction of the warm ocean water that's melting the underside of these ice sheets," Reeder said.

He said improving our scientific understanding of what's happening in the Antarctic region "could help us as a global society act with greater urgency."

Dutrieux added, "It's not every day when we do earth science that we are able to, maybe, eventually impact the life of many people."

Today 18° Times of sun and clouds