“We have identified over 150,000 potentially fraudulent ballots in Wisconsin, more than enough to call into question the validity of the state’s reported election results,” said Phill Kline, director of The Amistad Project of the Thomas More Society in a news release. “Moreover, these discrepancies were a direct result of Wisconsin election officials’ willful violation of state law.”

In an interview with CBS 58, Kline, the former Kansas attorney general, said the current recount has no bearing on the lawsuit.

“The recount won’t catch it," Kline said. The recount just validates the fraud.”

According to a news release from The Amistad Project, the discrepancies discovered in their investigation, conducted in the last several weeks, include more than 10,000 Republican ballots that weren’t counted, more than 10,000 Republican voters who had their ballots requested and filled in by another person, and around 100,000 illegal ballots that were counted anyway. The problematic ballots were identified in a data analysis performed by statistician Matthew Braynard and mathematician Steven Miller.

“You cannot verify or validate that the final count, and who is declared the winner at this time, was accurate," Kline said. 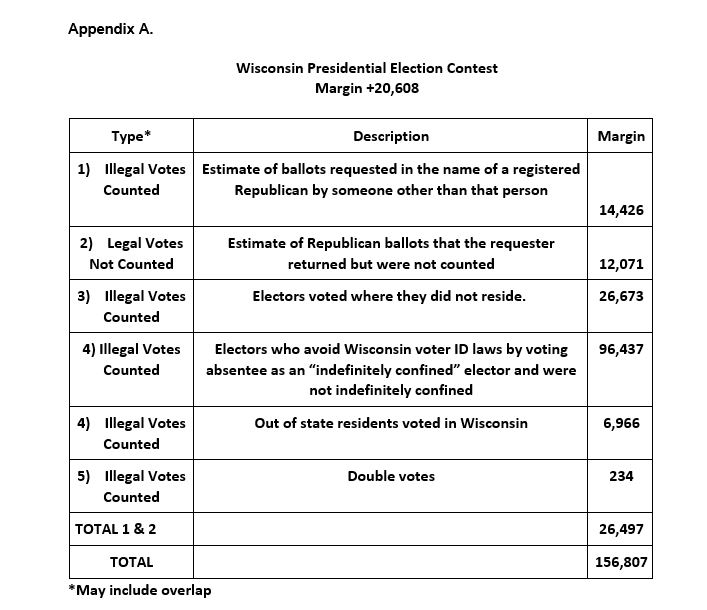 The lawsuit, according to the release, details a series of illegal actions taken by Wisconsin officials that led to significant numbers of improper votes being counted, as well as tens of thousands of legal votes that were not counted.

The release goes on to say statistical analysis indicates that nearly 100,000 persons who exploited this exemption to cast absentee ballots were not actually indefinitely confined on Election Day, meaning they should not have been eligible to vote.

The Biden campaign sent the following statement to CBS 58:

“As we have seen repeatedly across the country, the Trump campaign and their Republican allies are once again making outlandish claims not rooted in fact. This lawsuit, seemingly part of a multi-state effort to disenfranchise millions of voters, is baseless. Days into the recount, the truth remains undeniable -- Joe Biden clearly and resoundingly won Wisconsin and his victory will be reaffirmed,” campaign spokesperson Nate Evans said.

The lawsuit aims to give the Wisconsin GOP-controlled legislature the power to chose presidential electors.

Wisconsin's Democratic Attorney General Josh Kaul has until Friday to officially respond. But on Tuesday, he said “The litigation filed this afternoon seeks to disenfranchise every Wisconsinite who voted in this year’s presidential election. The Wisconsin Department of Justice will ensure that Wisconsin’s presidential electors are selected based on the will of the more than 3 million Wisconsin voters who cast a ballot.”

None of the Trump campaign's lawsuits to block certification in any of the states he is contesting have been successful to date.