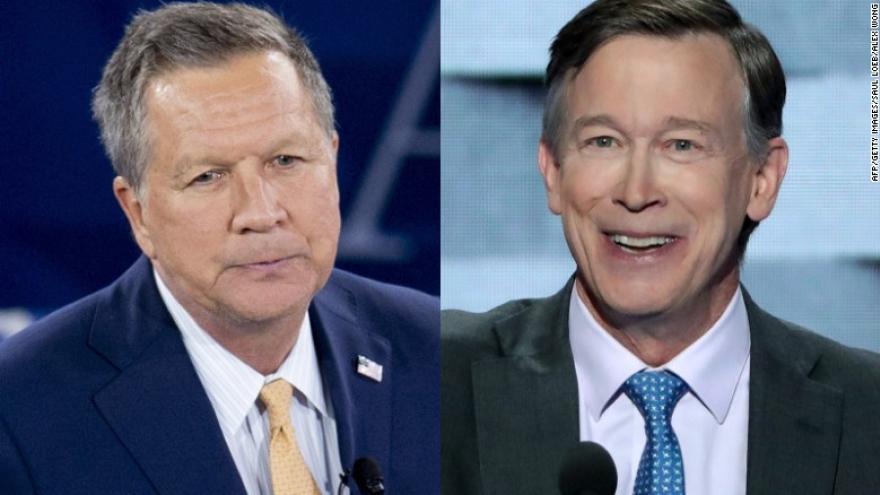 (CNN) Ohio Gov. John Kasich and Colorado Gov. John Hickenlooper have entertained the idea of forming a unity presidential ticket to run for the White House in 2020, a source involved the discussions tells CNN.

Under this scenario, Kasich, a Republican, and Hickenlooper, a Democrat, would run as independents with Kasich at the top of the ticket, said the source, who cautioned it has only been casually talked about.

"The idea of a joint ticket has been discussed, but not at an organizational or planning level," said the source, who spoke only on the condition of anonymity. "What they are trying to show the country is that honorable people can disagree, but you can still problem solve together. It happens in businesses and it happens in families. Why can't it happen in Washington?"

News of the discussions was first reported by Axios.

In early August, Hickenlooper didn't lend much credence to rumblings of a unity ticket, telling Politico: "I don't think Kasich would ever do that. ... I don't think it's in the cards. But I do like the idea of working with him in some context at some point."

Kasich and Hickenlooper are working together on major policy issues such as healthcare and immigration -- a rare, bipartisan alliance at a time of deep seeded acrimony between the two political parties.

The next steps for the two governors will be more policy than politically focused.

"Watch on the policy front as they expand beyond healthcare and also include other governors into the coalition," said the source.

CNN has reached out to both Kasich and Hickenlooper for comment.