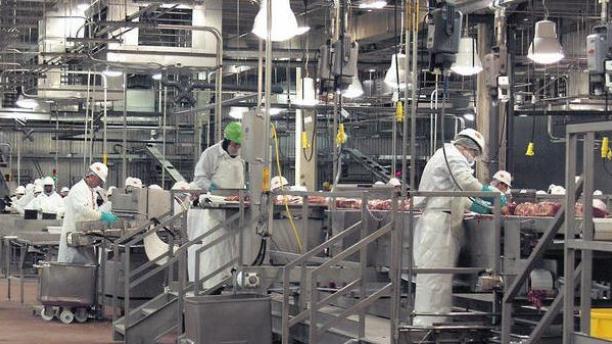 (CBSNews) Beyond the low wages and high injury rates, the nation's roughly 250,000 poultry workers are routinely denied bathroom breaks, leading some to wear diapers and others to not drink liquids. That's according to a report released by Oxfam America, which details conditions that violate U.S. workplace safety laws.

"It's just basic human dignity, the right to be able to use the bathroom when you need to, as opposed to having to hold it for two hours until the next break, or worse, having to wear diapers or urinating or defecating on yourself," Hunter Ogletree, an organizer at the Western North Carolina Workers' Center, told CBSMoneyWatch.

Oxfam cited the workers' advocacy group's year-long review of conditions at the Case Farms plant in Morganton, North Carolina, which found the bathroom issue to be the top concern for its roughly 800 workers. The employees, paid around $9 to $10 an hour, recently launched a petition campaign through the workers' center calling on the company to let them have bathroom breaks.

"Because they are small it seems they feel they can get away with a lot of these injustices that are taking place, perhaps they might feel they are not going to be held accountable as somebody like Tyson might be," Ogletree said.

The inability to use the bathroom when needed comes in a high-injury industry, where the repetitive motion involved in the work can leave workers with wrist pain and worse.

"We've seen women that can't hold babies because their hands are so deformed from processing a chicken every two seconds, it's the same motion once every two seconds for eight to 10 hours a day," Ogletree said. "When they can't move their hands anymore, they find a way to dispose of the workers. It's sort of like the chicken, they are brought in and spit out."

"Like the workers, these animals are stripped of their dignity and their inherent worth as living beings, all so others can have a fleeting, low-cost meal," Colleen O'Brien, a senior director at the animal-rights group noted Thursday in an email.

Case Farms has two other chicken processing operations in North Carolina, in addition to the Morganton facility, and another two in Ohio. The U.S. Department of Labor Occupational Safety and Health Administration in August placed Case Farms in its Severe Violator Enforcement Program, which is focused on employers who it says demonstrate indifference to the health and safety of their workers through willful, repeated, or failure-to-abate violations relating to significant hazards.

Jason Arnold, manager at the Morganton plant, did not return a call requesting comment, while Case Farms issued a statement late Wednesday saying it believed the difficulties described to be "extremely rare and that U.S. poultry companies work hard to prevent them."

Allowing for bathroom breaks is a logistical challenge at a poultry plant, an industrial operation where the whole line slows if one part stops, Oxfam noted in its report. Workers who need to use the bathroom must ask a supervisor, who then has to find someone to fill the spot to keep the line running.

An adequately staffed plant has line assistants or floaters ready to step into any spot, and ideally workers would be given time to get to facilities that can be far away, along with having to remove and put back on the gloves and smocks worn for work.

Yet in the course of hundreds of interviews only a handful of workers described their bathroom needs as respected, with those exceptions occurring primarily in plants with unions. Workers representing by unions reported feeling comfortable leaving or stopping the line when their requests were denied too long. About two-thirds of the poultry workforce is not unionized.

One survey of 266 workers in Alabama conducted by the Southern Poverty Law Center found almost 80 percent were not allowed to take bathroom breaks when needed. A recent survey in Minnesota found 86 percent of workers interviewed said they get fewer than two bathroom breaks a week.

Workers interviewed by Oxfam and partner organizations reported being yelled at or made fun of by supervisors, who also threatened firing or deportation. The harassment is "exacerbated when the worker needs to ask permission to go to the bathroom, and the supervisor is feeling the heat to keep the line moving," the report said.

According to Oxfam, a worker at a Pilgrim's plant in Alabama said supervisors regularly threatened people: "Go to the bathroom, and from there, go to Human Resources." An employee at a Tyson plant in Arkansas said: "Our supervisor always makes fun of us. He says we eat too much so we go to the bathroom a lot." Another Tyson worker in Arkansas noted: "One of the ladies who works with me was pregnant, and she was crying and walking out because our line lead didn't let her go to the bathroom." A woman worker at a Perdue plant in the Delmarva region cited in the report said she once waited so long that she defecated in her pants before she got a break.

A worker at a Sanderson plant in Mississippi noted: "Women have to tell male supervisors why they have to go to the bathroom and only have a few minutes to go and return. The supervisors are not considering the time it takes to walk to the restroom, remove your gear, put your gear back on and return to the line in those few minutes."

"Any allegations of the nature claimed by Oxfam, if proven, would be clear violations of company policy and would result in disciplinary action," Pilgrim's Pride said in an emailed statement. "Bathroom breaks have not been raised as an issue in any of our internal team member satisfaction surveys, nor in the results of our third-party-conducted sustainable safety culture surveys."

In its emailed response, Perdue said the anecdotes reported were not consistent with its policies and practices, and that an internal review did not find any bathroom-related complaints. Perdue workers get two 30-minute breaks during each eight-hour shift, the company said. "If an associate is unable to wait for the scheduled break and needs to use the restroom, they are to be given permission to leave the line as soon as someone can cover for them," according to the Perdue statement. "If a department is short-staffed that day, there may be times it is difficult to provide immediate coverage."

Tyson did not return a request for comment, while Mike Cockrell, chief financial officer and treasurer at Sanderson Farms, declined comment.