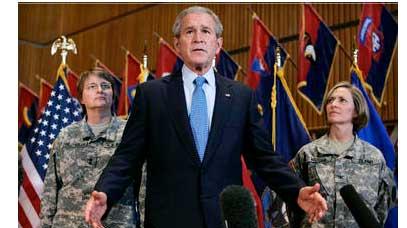 (CBS NEWS) George W. Bush fears that the end of the Republican party as he knows it is near.

"I'm worried that I will be the last Republican president," Bush reportedly told a reunion of former staff and advisers in April, according to a story by Politico. The former president was speaking with "a smaller clutch of former aides and advisors" during the event.

At that time there were two candidates left in the race for the Republican nomination, Donald Trump and Ted Cruz, and Bush didn't like either of them, although his displeasure with Cruz was at least in part reportedly related to Cruz's overtures toward Trump early in the race for the nomination.

In May, once Trump had secured enough delegates for the nomination, a spokesman said that neither he nor the elder Bush planned to endorse Trump for the presidency. This was unusual, given that both had endorsed prior nominees Mitt Romney and John McCain.

While Trump has the support of many top GOP leaders, like Paul Ryan and Mitch McConnell, many have expressed concerns with his divisive style and his temperament, as well has his policy proposals -- like building wall at the southern border with Mexico and a Muslim entry ban. Bush seemed to be hinting at something darker, however, the idea that he might be looking at the end of the Republican party.

George W. Bush has largely stayed away from the political fray surrounding the presidency since his brother Jeb Bush dropped out of the Republican primary in February.