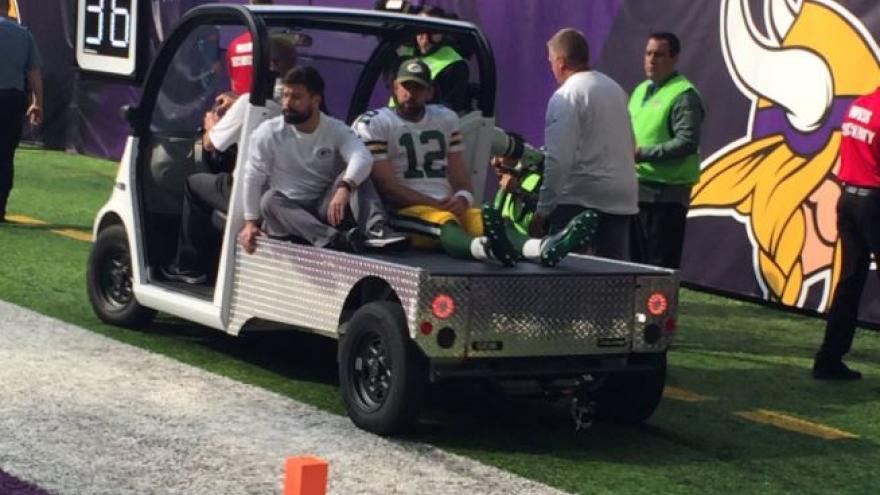 (CBS Sports) -- The Green Bay Packers saw their Super Bowl dreams go up in a cloud of smoke last week when Aaron Rodgers suffered a broken collarbone on his throwing shoulder against the Vikings, a play that Packers coach Mike McCarthy openly ripped. But there is some newfound optimism in Green Bay on Sunday, with a report stating that Rodgers could be back before the regular season ends.

According to Adam Schefter of ESPN, Packers doctors have informed Rodgers and the team they believe the former MVP "will be able to resume throwing in six weeks, giving him a chance to return near the end of the regular season."

But there's a caveat to this too. The Packers have to be in a race for the playoffs for Rodgers to actually return.

Essentially Green Bay and Rodgers would be willing to aggressively push the timeline for bringing Rodgers back off IR if there was a chance he could return and help the Packers secure a playoff spot. If Green Bay goes on a bad losing streak, or falls too far behind the crowd in the NFC playoff race, Green Bay will just shut him down for the year and let him make a standard recovery this offseason.

The earliest Rodgers could return is before Week 15, when the Packers play the Panthers on Dec. 17. He could play for that game, if activated by Green Bay off of IR, and then the final two matchups against the Vikings (Dec. 23) and Lions (Dec. 31).

What would be fascinating here is if Rodgers comes back FASTER from this collarbone injury than he did in 2013, when he broke the clavicle on his non-throwing shoulder. Rodgers suffered that injury on Nov. 5 and returned for a Week 17 matchup against the Bears, performing well enough to push the Packers into the playoffs at 8-7-1.

Green Bay got lucky with the division being down that year, but the Packers might get lucky with basically the entire NFL being down this season. The NFC race is wide open, and only five teams in the entire NFL are more than a game out of first place through six weeks. The NFC South looks like it could produce multiple playoffs teams, but there is a very good chance the NFL landscape looks completely different 10 weeks from now than it does heading into Week 7.

If Hundley can be the quarterback McCarthy appears to believe he can -- the coach has loudly defended his young backup, who has now spent three years in the Packers system -- then it's entirely possible the Packers are still a part of that landscape. And if that's the case, we could ultimately end up seeing Aaron Rodgers back on the field before the calendar flips to 2018.