Record-breaking cold possible across much of U.S. 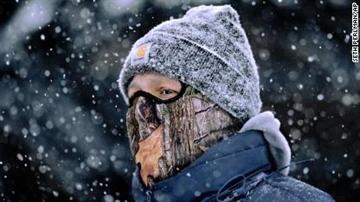 (CNN) -- This is the definition of rare air.

The National Weather Service warned Sunday that much of the United States will see this week the coldest temperatures in almost 20 years as an arctic cold front descends on 140 million people.

\"A piece of a polar vortex, the coldest air in the Northern Hemisphere ... is coming,\" CNN Meteorologist Alexandra Steele said.

And in addition to the cold, there will be heavy snow in the eastern Plains and Great Lakes, as much as a foot Sunday.

Temperatures will be 30 to 50 degrees below average Sunday from the Plains to the Upper Mississippi Valley, forecasters said.

By Wednesday, nearly half the nation will shudder in temperatures of zero or lower, forecasters said. Even the Deep South will endure single-digit or sub-zero temperatures.

Sunday's weather will have a huge impact on travel, with more than 2,200 flights originating in or heading to the U.S. canceled, according to flight-tracking website flightaware.com.

Port Authority spokesman Ron Marsico said the plane, carrying 32 passengers, skidded into a snow bank while turning onto a taxiway after landing safely. No injuries are reported. The aircraft was towed to the gate, the Federal Aviation Administration said.

Flight operations were suspended for about two hours.

Traveling to or through Chicago was causing many headaches.

There were arrival delays at O'Hare airport of more than one hour on average, and at least 1,100 cancellations of departing or arriving flights. At Midway airport there were 140 cancellations.

Here's what to expect across the country this week:

Snow was falling across the Midwest. In Brownsburg, Indiana, more than 4 inches had fallen during the morning hours, said Bill Byrd.

\"Most people are staying in their homes, and church services are canceled,\" he told CNN.

In Wisconsin, more than 70,000 hardcore Green Bay Packers fans hoping to see their team get closer to the Super Bowl will have their loyalty tested Sunday as they endure temperatures between 4 and 8 degrees in Wisconsin. With the wind, the air could feel as cold as minus 15 degrees to the sold-out crowd.

The Packers will give free hand warmers, hot chocolate and coffee at the game, which is scheduled to begin at 4:40 p.m ET, spokesman Aaron Popkey said.

Packers running back Eddie Lacy said he didn't think there was much he could do to prepare for a game this cold.

\"It's definitely going to be a different experience,\" he said Saturday, according to the team website. \"It's mind over matter.\"

And it'll get worse, overnight temperatures are expected to fall to minus 15 degrees.

In Embarrass, Minnesota, residents wondered whether they might see their record-cold temperature of 64 below zero, set in 1996, snap like an icicle.

\"I've got a thermometer from the weather service that goes to 100 below,\" resident Roland Fowler told CNN affiliate KQDS. \"If it gets that cold, I don't want to be here.\"

The arctic blast threatens to sweep subzero lows as far south as Alabama and plunge much of the Deep South into the single digits.

To put things in perspective, the weather in Atlanta and Nashville, Tennessee on Monday will be colder than in Anchorage, Alaska, Steele said.

Freezing rain is also possible along the Appalachians all the way up to New England over the next couple of days, the National Weather Service said.

The low temperatures and wind chill are a dangerous recipe for rapid frostbite or hypothermia.

\"Exposed flesh can freeze in as little as five minutes with wind chills colder than 50 below,\" the National Weather Service's Twin Cities office in Minnesota said.

Over the past week, at least 13 people have died from weather-related conditions.

Eleven people died in road accidents -- including one man crushed as he was moving street salt with a forklift.

One man in Wisconsin died of hypothermia. And an elderly woman with Alzheimer's disease in New York state wandered away from her home and was found dead in the snow in a wooded area about 100 yards away.

Indiana Gov. Mike Pence encouraged residents to do more than check on friends and relatives.

\"In preparation for the inclement weather, I encourage Hoosiers to assemble an emergency preparedness kit with plenty of nonperishable food and water, fill any necessary prescriptions, ensure they have a safe heating source, avoid unnecessary travel and be careful if they must be outside.\" he said.

The already dreadful stream of stranded passengers and canceled flights will only get worse.

FlightAware.com, which tracks cancellations due to weather, mechanical and other problems, said more than 2,200 flights have been canceled for Sunday. That's after 4,500 flights were called off on Friday and Saturday.

In Chicago, a plane headed to Las Vegas slid off the taxiway at O'Hare International Airport on Saturday night. None of the passengers on Spirit Flight 245 were injured, an airlines spokeswoman said.

This, too, shall pass

If there's any good news about the biting cold snap, it's that much of it should be over for the Midwest by Wednesday, the National Weather Service said.

In the meantime, those in the western third of the country can skip all the fuss. Most of the West can expect relatively pleasant weather through Monday.