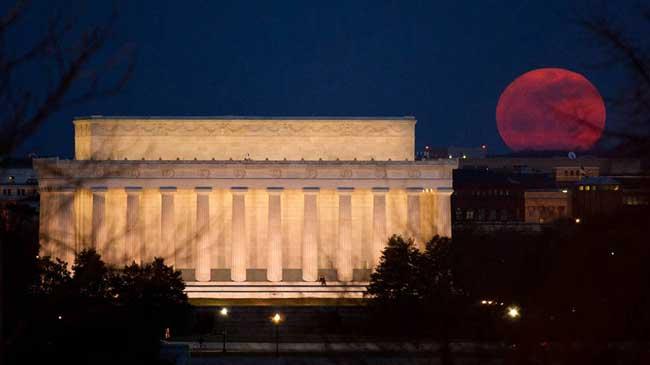 (CNN)Stargazers, night owls and space observers, be prepared, the eclipse of the supermoon is coming.

The United States and much of the world will see skies graced by a bright, big moon that will be encapsulated in a total lunar eclipse late Sunday evening into early Monday, according to NASA.

The lunar combination is happening for the first time in 30 years.

The supermoon, which comes around once every year, will appear 14% larger and 30% brighter in the sky that evening before it is engulfed by an eclipse for more than an hour.

As if that wasn't already a spectacular sight, this eclipse is the fourth and final in the so called "blood moons," a phrase that has become popular to describe the four lunar eclipses we have seen in 2014 and 2015. Scientifically this is known as a "lunar tetrad" and will not occur again until 2033.

How to watch the supermoon eclipse

The total lunar eclipse will last about one hour and 12 minutes, according to NASA. It will be seen in North and South America, as well as Europe, Africa, parts of West Asia and the eastern Pacific.

However, skywatchers can camp out early for the partial lunar eclipse, which will begin at 8 p.m. ET in the United States. As the planet's shadow dims the supermoon, this will create dramatic viewing opportunities for observers. The eclipse will reach its peak during the 10 o'clock hour, giving the supermoon a reddish, copper-like hue. The event should end after midnight.

Unlike solar eclipses, which need to be viewed with special eye gear, the lunar eclipse can be seen with the naked eye after nightfall.

People interested in seeing the event can simply step outside Sunday evening to see the lunar phenomenon. For a better view, some parks and planetariums in the United States will be scheduling viewing parties.

See the forecast for your region to learn whether your location will be able to view the eclipse.

Why this event is special

Since the orbit of the moon is not a perfect circle, there are times when the moon is closer to our planet. This is known as perigee. Sunday's supermoon will technically be a perigee full moon, the closest full moon of the year, NASA says.

"There's no physical difference in the moon," said Noah Petro, scientist for the Lunar Reconnaissance Orbiter at NASA's Goddard Space Flight Center in Greenbelt, Maryland. "It just appears slightly bigger in the sky. It's not dramatic, but it does look larger."

Lunar eclipses are common and happen twice a year. However, there are some end-times theorists who view Sunday's event as a signal for the end of the world.

But the last time a supermoon eclipse occurred was in 1982, making Sunday's rare event worth staying up past bedtime.