Rare cranes from Canada, Wisconsin, Maryland being gradually introduced to the wild in Louisiana 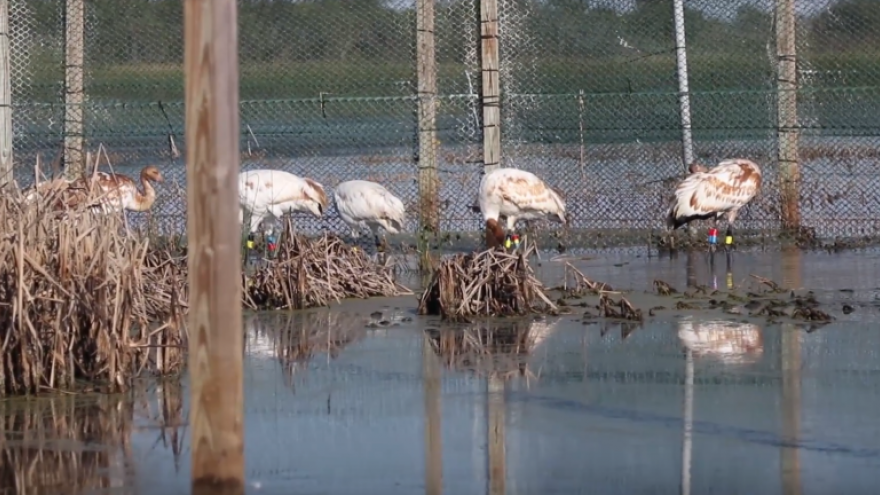 NEW ORLEANS (AP) — A dozen young whooping cranes from Wisconsin, Maryland, and Alberta, Canada, are being gradually introduced to the wild in a Louisiana refuge.

The Audubon Species Survival Center's assistant curator, Richard Dunn, says Tuesday was a big day. He brought the rare, endangered birds to the Rockefeller Wildlife Refuge on the southwest Louisiana coast and across the state from New Orleans, where three cranes hatched and were introduced to the others.

"You're hoping you're doing everything right to produce birds that can survive the world," he said. Dunn said the emotional response was rather like "All right! You got your kids to college!"

Another 11 juveniles were brought to the White Lake Wetlands Conservation Area, about 20 miles (32 kilometers) further north, on Nov. 9 to begin a similar adaptation.

That means 72 whooping cranes are now living in the wild in southwest Louisiana.

Whooping cranes, standing 5 feet 9 (1.5 meters) tall, are North America's tallest flying bird and among the world's rarest with only about 600 alive. About half are in the only natural flock, which migrates between Canada and Texas. Another 137 are captive and nearly 100 are in a flock taught to migrate from Wisconsin to Florida by following ultralight planes.

The 23 youngsters are becoming acclimated in pens covered with netting. After a while they'll be released into a larger uncovered pen that will protect them from most predators while allowing other birds to fly in and these — when they're ready — to fly out.

The 11 released at White Lake all came from the International Crane Foundation in Baraboo, Wisconsin, according to a news release from the state Department of Wildlife and Fisheries.

Audubon staffers hatched three eggs taken from the wild in Wisconsin, where blackflies had driven parents from their nests. Dunn said they were able to place one chick with adult birds whose egg hadn't hatched. But staffers had to raise the others, wearing baggy costumes to disguise their human shapes and manipulating crane "puppets" to show the chicks how to peck.

Another seven birds were raised at Patuxent Wildlife Research Center in Maryland and two at Canada's Calgary Zoo. They were brought together at Audubon to form a group that got along together.

Since these birds don't have parents to teach the survival skills, the cohort acts as a family to increase their chances, Dunn said.

The near-extinction of the species came about through hunting and habitat loss.