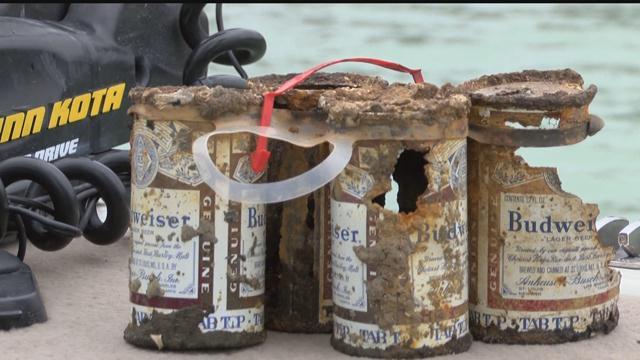 A rare catch by three Milwaukee fishing buddies is making quite the splash, butt -- we're not talking about a fish.

A recent fishing trip led Adam Graves, Christian Burzynski and Andy Holst to their 15 minutes of fame -- sort of.

“I never thought I’d ever have a phone call from the CNN news desk," said Graves. "Let alone for some beer cans in the Wisconsin river.”

The group of guys reeled in an old 6-pack of Budweiser when they were fishing in Fremont on the Wolf River. After they found them they reached out to Anheuser Busch, and the company told them they estimate the cans to be around 50 or 60 years old.

The story got picked up by local -- and then national and international news outlets.

"It’s taken a little while to soak in I guess," said Holst. "My phone is wearing down the battery every hour it seems like. It’s pretty exciting."

"It’s really just been crazy," said Graves. "My phone's just been going off the hook. I think it’s just cool for my son and my wife to see me on TV."

The cans look like trash -- because well, they are. But to a lot of people, the story is a treasure. It's especially picking up steam with Wisconsin residents who say of course this would happen in the Badger State.

Pictures and videos on Facebook have been shared thousands of times -- but opinions differ on the quality of the brew.

"I don't blame whoever chucked those in the lake. I would do the same to any Budweiser," said Facebook user Joe Juarez.

"Budweiser should be catch and release," said Hugh Girrod.

The guys aren't surprised by the response.

"I think it’s just a feud that’s gone back as long as the Bears and the Packers," said Burzynski. "We’ve always been a Miller city."

Either way, the guys are loving the attention.

"Well it's certainly unexpected," said Graves. "I think it was really cool just to see the national and local coverage it got I think it made some people happy to see that story."

The guys say they’re glad to highlight two of what they call the best parts of living in Wisconsin – fishing and beer.

"I think its great. I think anytime you can share a story like that, especially with all the bad stuff going on in the world," said Graves. "To have a fun story like that to share with friends and family is something we should do more often."

“To sum it up," said Burzynski. "Only in Wisconsin.”