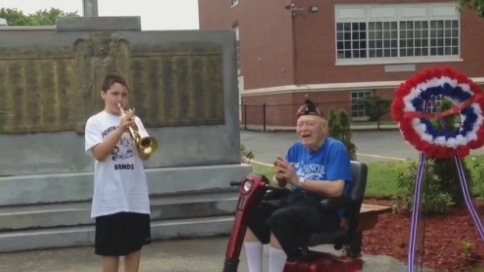 BELLMORE, N.Y. (CBSNewYork) — The rain on Long Island could not stop a patriotic young boy’s plans to thank veterans.

CBS2’s Lou Young spent Friday evening in a North Bellmore living room, listening to 11-year-old Nicholas Degregorio play the trumpet. But it got better from there.

Nicholas’ mom said the Memorial Day parade had been canceled because of unsettled weather. Nicholas who was primed to play in his first marching band insisted that the show must go on.

He played in a moving car while his father drove the parade route, and his mother memorialized the moment. That’s when he met a World WarII veteran who was also disappointed about the parade.

“I said I would play the trumpet for him; Grand Old Flag, on the trumpet,” Nicholas said, “Because I wanted to honor and respect the veteran because he served in World War II, and thank him for his service.”

Nicholas went viral playing for 93-year-old Constantine Innacone who served in Germany in 1945. He was a smiling, grateful audience of one.

Nicholas’ grandfather understood both of them in the moment — a grandson with a big heart, and a fellow vet from the big war.

“He was looking forward to a parade to go to, the gentleman was looking for a parade, and was disappointed, and it served to build his spirits up a little bit,” Guido DeGregorio said.

Nicholas has a great deal of respect for the veteran.

“I was glad he felt honored and respected,” he said.

The man wasn’t well enough to receive visitors on Friday, but Nicholas plans to check on him when he feels better.