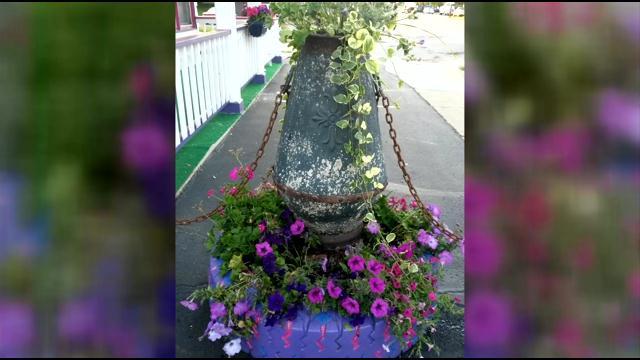 It's painted pink and purple to match Alicia Villa's property at State and Lawn streets in Racine.

\"I think it gives it more of  western look,\" she said. \"I anticipated the flowers to be blooming in mid part of July, August.\"

But those flowers aren't blooming where she wanted.

Pictures show what it looked like just last week. The old tire her husband found unused on the street had been decorated and was being re-used as a flower bed under the vase.

But the city said she can't do that, because a tire is considered solid waste and must be disposed of properly.

The landscaping is part of a conditional use permit Villa needed to turn the first floor of her property into a residence.

The city said her original plan was presented without the tire and approved. If it had been, the city says \"staff could have informed Ms. Villa the tire was not an acceptable landscaping solution and considered solid waste under city ordinances.\"

\"For something so minute like that I think they should reconsider,\" she said.

But Villa has failed to make that happen. So for now, her creativity takes a back seat to following the rules.

Villa plans to fight for her tire planter at the Tuesday, July 21 common council meeting. If the decision isn't reversed, she will abide by the rules and hope the city will consider amending the ordinance.