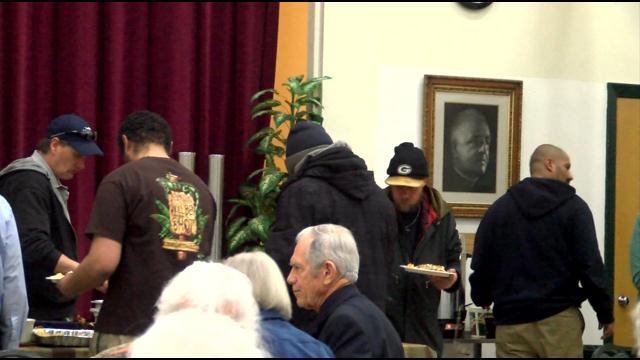 Despite donations pouring in and support from the community an overnight shelter for the homeless in Racine will close its doors at the end of March, leaving many without a place to go.

Hundreds of people have come to these doors at the Hospitality Center, seeking a place to sleep, but soon the doors will be closed at night and that's got Reverend Kevin Stewart wondering if they will now be sleeping in front of the doors instead.

\"I promised them that we would provide shelter as long as we could and that we would stand with them and for them so we could create  a long term, permanent solution,\" said Stewart.

Donations helped keep the shelter open through this winter, but the need has become too great.

The shelter was once flooded with donations, almost all of which have been used by people at the center, but Reverend Kevin Stewart says what's needed is not more clothing donations. It's more money, more people, more buildings.

\"We don't have showers here, we don't have storage facilities here. We're maxing out on space so its going to require a different location and everything that comes with,\" said Stewart.

Though the shelter wasn't designed to host people overnight it's done so for the past three years.

Michael Ludwigson say its his safe haven every night while he gets back on his feet.

\"I come here because I like the people and I'm homeless. I have no where else to go,\" said Ludwigson.

There are other shelters in Racine but most have restrictions. They dont take just anyone off the street. Stewart says the Hospitality Center has filled that void.

\"The criteria for admission to the Hospitality Center:  Are you telling me you're afraid? Are you saying you have no where else to go? Then we say come on in,\" said Stewart.

But not for much longer. So for now, Ludwigson is gearing up to sleep on the streets.

\"It's really embarrassing. Places to camp out, then you've got police bothering you. It's really a tough idea,\" said Ludwigson.

Those interested in helping find a permanent solution to homelessness in the Racine area are invited to a community meeting March 24th, starting at 6:30PM at Gateway Technical College.