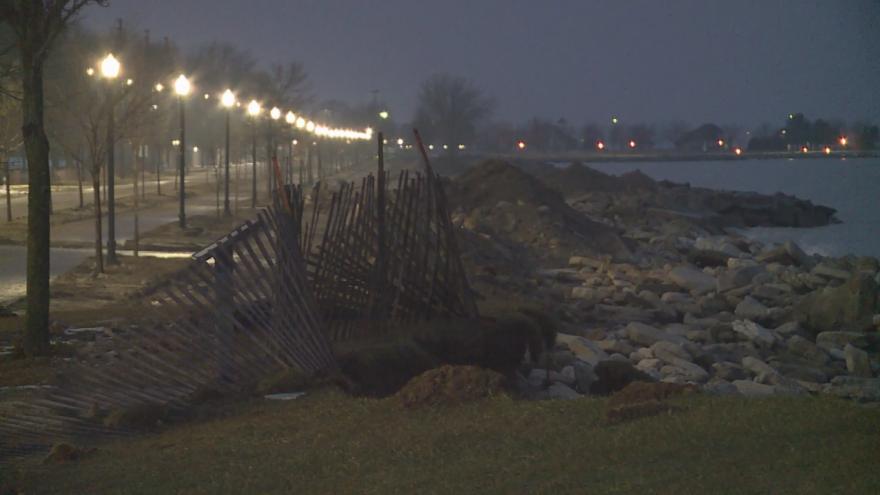 “It’s not safe for traffic to be down there when there’s that kind of weather so we’re really going to have to rebuild that infrastructure," Mayor Cory Mason said.

The view along Pershing Park Drive is now littered with piles of dirt and broken fences.

Mason said the break wall collapsed, pushing some debris 30-feet onto the land. It’s mostly cleaned up now but the farther south you go, he said there’s almost nothing left.

“And if you’re north of the zoo you can see where the bike path fell into the water," he added.

"This is the fourth time this has happened this winter and this is the worse," resident Pat Mich said.

Mich walks along the shore daily, and she backs the mayor's emergency declaration.

The mayor is asking for state and federal assistance so that local leaders can fully assess the devastation and put a price, and a plan, together.

She also believes climate change is contributing to the extreme weather, weather that Mayor Mason thinks leaders need to take seriously, especially along the lake.

“As this happens more and more, and as the climate is changing and the lake levels are rising building a resilient lakefront is going to be something that we’re going to have to think about for the future," Mason said.

Mason estimates the damage will cost millions to fix, but said it's too early to tell.

Governor Evers office told CBS 58 it is working with all storm-affected cities along the Lakefront and is ready to help.