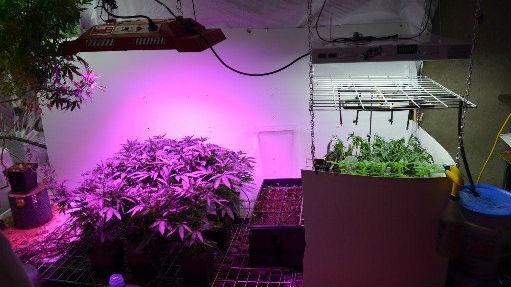 On October 1st, 2015 at approximately 2:15 P.M., Agents from the Racine County Metro Drug Unit served a search warrant in the 6700 block of Brian Drive, Wind Lake, Wisconsin. In the basement of the residence, a large and elaborate marijuana grow operation was located. Suspect James E. Campbell was arrested at the scene.

The marijuana operation consisted of 95 live plants in various states of maturity. The marijuana was being grown with an elaborate lighting and hydroponic watering/fertilizing system. The suspect admitted to having approximately $8000 invested in the growing operation and a $500 per month electric bill.

Agents also located almost 10 pounds of dried marijuana buds and flake, marijuana plant stems and leaves. It was discovered that the suspect was also making THC “Butter” and “Dabs”. THC “Butter” (cannabutter) is used to make edible THC products (cookies, brownies). Dabs or Wax is a highly concentrated THC substance similar to Hash oil. This substance is often smoked using vaporizer devices or electronic cigarette devices and is considered to be approximately four times as strong as smoking regular marijuana.

It is estimated that one mature marijuana plant can produce approximately one pound of marijuana. The selling price of marijuana can vary greatly depending on the quality, but can range between $1000 and $4000 per pound. THC “Butter” can sell for approximately $40 per 4 ounce stick. “Dabs” being a much more concentrated form of THC can sell for $40 - $70 per gram. The consumption of edible THC products and the smoking/vapor inhaling of “dabs” has become much more popular since the legalization of recreational marijuana use in other states.

The suspect, James E. Campbell, age 53, is being held at the Racine County Jail on charges of manufacturing marijuana, possession of marijuana with intent to deliver, keeper of a drug house for manufacturing THC and possession of drug paraphernalia. His initial bond is set at $87,600.00.00.