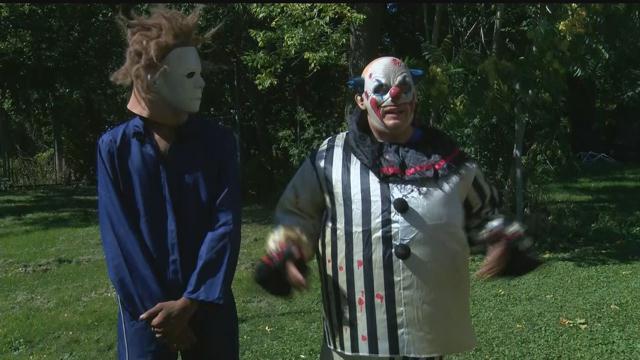 The reports started in South Carolina, people dressed up as clowns frightening children.

Similar stories then popped up in California, then more states. In Wisconsin, police took a report of clowns scaring children in Racine.

Police received a call Friday afternoon, and responded to 11th and Pearl. Police Sgt. Adam Malacara says he found the clowns sitting on a front porch.

"They were spoken to, they were advised, so hopefully they got that message and they're not going to do it again," said Sgt. Malacara.

Sgt. Malacara says no citations were issued, but a warning was given.

The two clowns say the costumes are not promotion for a movie or haunted house; they chased and played dead for the kids on the block, but say it's just to entertain and all in good fun.

"I've gotten a lot of smiles, or, 'Hey, Can I touch your nose.' reactions or, 'Hi, are you friendly?'" said Dylan Creekpaum, also known as Chuckles the Clown.

Creekpaum said he is surprised to see how his presence has blown up on social media. Search "Racine Clown" on Facebook, and you'll see posts with sightings.

The two clowns say they haven't been far from 11th and pearl. except the Racine Raiders football games. Creekpaum says he's been invited to make an appearance at every home game.

"I'm here to promote good not violence. Nothing else... I just do it for the community," said Creekpaum.

He doesn't want to scare anyone.

"It started off in the community just walking around here. Ask the kids. They come up to the window. 'Hey, come on outside!'"

Chuckles the clown and his clown companion Michael Meyers said they'll continue to make appearances around Racine. Here is his facebook.com page.

"I do it for the laughs, for the smiles. It gives me a kick," said Creekpaum.