R. Kelly breaks his silence on sexual abuse claims: "I have been assassinated" 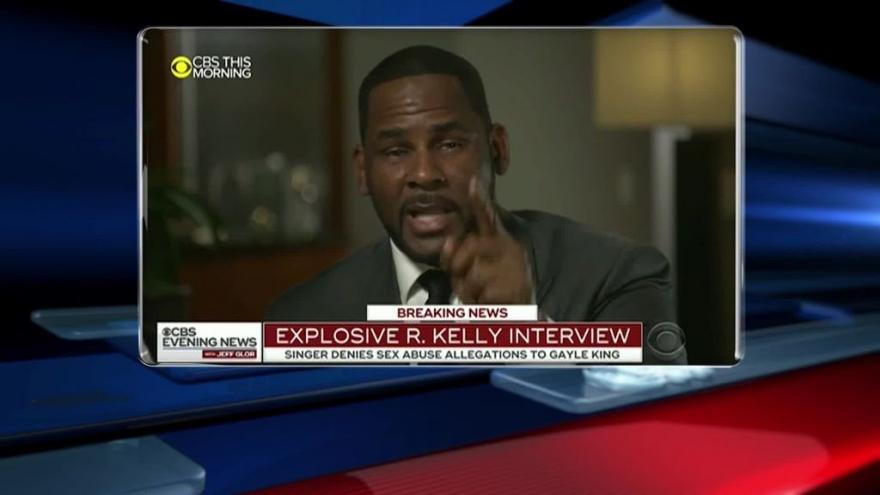 (CBSNews) -- In an explosive interview, R. Kelly is breaking his silence about the sexual abuse charges that landed him in jail last month. The embattled R&B singer spoke with "CBS This Morning" co-host Gayle King for nearly 80 minutes Tuesday. He said all the women now accusing him of physical and sexual abuse are lying.

"I am surprised that you agreed to do it. Why are you sitting down with us today?" King asked the singer.

"What are the lies that you're hearing that disturb you most?" King asked.

"Oh my God. Um -- all of them, got little girls trapped in the basement… helicopters over my house trying to rescue someone that doesn't need rescuing because they're not in my house," he said, adding, "Handcuffing people, starving people. I have a harem, what you call it – a cult. I don't even really know what a cult is. But I know I don't have one."

Chicago prosecutors have charged Kelly with 10 counts of aggravated criminal sexual abuse. Three of the four alleged victims were underage when the suspected crimes happened. Kelly has pleaded not guilty. But sources tell CBS News federal and state authorities in at least two states, New York and Illinois, are now investigating a variety of allegations.

The singer has faced intense scrutiny for more than a decade. It was reignited in January after the six-part Lifetime docuseries "Surviving R. Kelly" featured interviews with seven accusers and former members of his inner circle. They all said Kelly preys on vulnerable women and young girls.

"Have you broken any laws when it comes to women?" King asked.

"Are you saying everybody in that documentary was not telling the truth about you? Everybody?" King asked.

"If you really look at that documentary, which I'm sure you have –"

"— everybody says something bad about me. Nobody said nothin' good," Kelly said. "They was describing Lucifer. I'm not Lucifer. I'm a man. I make mistakes, but I'm not a devil, and by no means am I a monster."

"They are lying on me," Kelly said.

"Why would these women say the same thing about you? That you are controlling, that you are abusive, that you tell women when to eat, when to go to the bathroom, when they can sleep, where they can dress?" King said. "Why would all these women tell these different stories about you if they were not true and they don't know each other? That defies logic to me."

"Right. Right. Until you hear the explanation. You can start a rumor on a guy like me or a celebrity just like that," Kelly said. "All you have to do is push a button on your phone and say so and so did this to me, R. Kelly did this to me, and if you get any traction from that, if you're able to write a book from that, if you're able to get a reality show… then any girl that I had a relationship in the past that it just didn't work out, she can come and say the same exact thing."

"Are you blaming this on social media?"

"I'm talking about the power of social media," Kelly said.

In 2008, Kelly was found not guilty on 14 counts of child pornography after prosecutors in Chicago failed to convince a jury that he was the man seen in a sex tape with a girl as young as 13.

Last month, Kelly was indicted again, this time he was charged with aggravated criminal sexual abuse of four women, including three who the charges say were minors at the time.

"Have you ever had sex with anyone under the age of 17?" King asked.

"What women said about me. So nobody's allowed to be mad at me and be scorned and lie on me?" Kelly said.

"So I think the point you're making is, and correct me if I'm wrong, that you have never held anybody against their will?"

"That's stupid, guys! Is this camera on me?" Kelly said.

"That's stupid! Use your common sense. Forget the blogs, forget how you feel about me. Hate me if you want to, love me if you want. But just use your common sense. How stupid would it be for me, with my crazy past and what I've been through – oh right, now I just think I have to be monster, and hold girls against their will, chain them up in my basement, and don't let them eat, don't let them out, unless they need some shoes down the street from their uncle!"

At this point, we briefly paused the interview to give Kelly a moment. His publicist helped calm him down.

"I hope this camera keep going –" Kelly said. "This is not true! That doesn't even make sense! Why would I hold all these women? Their fathers and mothers told me, we're going to destroy your career!"

"It's real girls out there missing! There's real young girls out there being abducted, being raped, OK?" Kelly said. "They really are on chains. They really do have chains on their—on their wrists and they can't get out and they end up buried and dead."

"I don't want you just ranting at the camera," King said.

"I came here for them to hear me talk. I need help!" Kelly said.

"What kind of help?"

"This is the kind of help I need. I need somebody to help me not have a big heart, because my heart is so big. People betray me, and I keep forgiving 'em!" Kelly said.

"It's because this is the first time I was able to say something," Kelly said. "I've said nothing!"