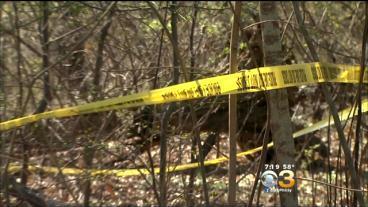 (CNN) For more than four days, police say, a 21-year-old quadriplegic with cerebral palsy was left lying in the woods of Philadelphia's Cobbs Creek Park with only a blanket and a Bible.

The person responsible is the man's mother, who on Sunday faced a host of charges after allegedly abandoning her son and catching a bus to Maryland to see her boyfriend, said Philadelphia police Lt. John Walker.

Low temperatures reached the mid-30s during the week, and rain was reported in the area Wednesday and Thursday.

The man is unable to communicate how he came to be in the park, but Walker told reporters that the man's mother, whom he did not identify for CNN, left him there Monday morning.

\"Sometime at 11 a.m., the mother went to visit her boyfriend down in Maryland, over in Montgomery County, and we believe she placed the child into Cobbs Creeks Park,\" Walker said at a news conference.

Walker told CNN the man was transported to Presbyterian Hospital, but CNN affiliates reported he was being treated at The Children's Hospital of Philadelphia. He suffered eye problems, dehydration, malnutrition and a cut to the back that has raised infection concerns, the lieutenant told reporters.

\"This kid's obviously a fighter,\" Walker said during a Saturday news conference. \"It's just unbelievable how we found him out there last night. To see that kid laying there, it's heartbreaking to see another human, especially a mother, can treat someone like that.\"

Officials at Philadelphia's School of the Future, which the man attends, became concerned when he didn't show up for classes and tried to contact his mother but eventually reached an aunt, CNN affiliate WPVI reported.

When police tracked down the mother, she told them her son was with her, Walker said.

\"She indicated to both family members and the police officers that the child was with her down with her boyfriend in Maryland,\" he said.

The boyfriend was not aware of what happened, Walker told CNN affiliate KYW-TV.

Walker told reporters she bore \"clear criminal liability in this case.\" Maryland police took her into custody on Sunday, and she will face the charges in Philadelphia following an extradition hearing, WPVI reported.

There was no reason for the man to suffer, Walker told philly.com, because the mother had sisters willing to take care of him. Two of his aunts, who have tried to obtain guardianship of him, were staying with him at the hospital, police told the website.

The mother has another child, a 16-year-old, who is also being taken care of by family members, WPVI reported.

The mother's arrest was only the beginning of the investigation, Walker told reporters. Authorities are interested in learning more about \"how this kid was cared for, and what actions were taken and providing of services by different agencies.\"