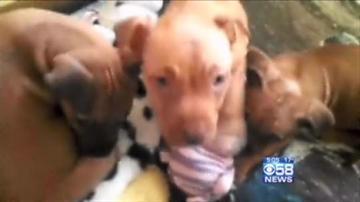 FOND DU LAC-It appears there is some long term damage to the dogs doused with bleach allegedly by a child.

The Fond Du Lac Humane Society says the male puppy has scarring on his lungs.

This will make him more susceptible to infections and disease.

So, they'll be giving him a vaccination to guard against kennel cough.

The female puppy is doing wonderful.

Best of all, eye exams for both went well.

At last report, there was no action taken against the boy or his mother who reportedly says the boy was bitten and thought he was throwing water, which turned out to be bleach.

The dogs were found in a dumpster.