Protests erupt in Charlotte for second night after police shooting 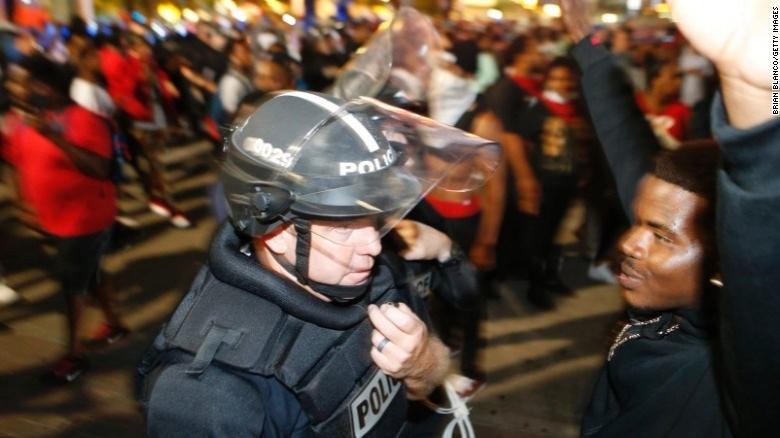 Appearing on FOX News as the demonstrations continued, Charlotte-Mecklenburg Police Chief Kerr Putney said one person was killed during protests. However, later, the City of Charlotte tweeted that the civilian is on life support and not deceased. North Carolina Gov. Pat McCoy declared a State of Emergency Wednesday evening, and said on Twitter he would be calling in the National Guard.Wednesday’s protest started as a downtown prayer vigil, but an angry group left the vigil and marched through downtown Charlotte.

They shouted “black lives matter” and “hands up; don’t shoot” while cursing at officers with bicycles blocking intersections. As the protesters approached the Omni hotel, officers in riot gear lined up outside arm in arm and a few marchers threw bottles and clods of dirt.

But not all the marchers left. Police in riot gear then began marching arm in arm through downtown Charlotte intersections, shooting tear gas at people who charged them. At least one protester knocked down a television reporter during a live shot.There were hints earlier Wednesday that Charlotte would suffer a second night of destruction. As Charlotte’s white mayor and black police chief stood at City Hall and appealed for calm, African-American leaders who said they were speaking for Scott’s family held their own news conference near where he was killed Tuesday, reminding the crowd of other shootings and abuses of black men.

John Barnett, who runs a civil rights group called True Healing Under God, or THUG, warned that the video might be the only way for the police to regain the community’s trust: “Just telling us this is still under investigation is not good enough for the windows of the Wal-Mart.”North Carolina Attorney General Roy Cooper also issued a statement Wednesday evening on the protests. He said in the statement that he urges everyone in Charlotte to heed the call for peaceful demonstration.

“We must come together as a community to get answers and find a better path forward,” the statement said.

Charlotte officials were attempting to “change the narrative” after violent protests in the city Tuesday.

At a news conference in reaction to official statements, regional civil rights leaders speaking on behalf of the family said the narrative is right, and police killed an innocent man.

Putney said at a press conference Wednesday morning that Scott, 43, had a gun in his hand when he was shot by police officers. A family member has claimed he was unarmed and reading a book when officers first approached him.

“I can tell you a weapon was seized,” Putney said. “I can tell you we did not find a book.”Putney said there is video of the incident, but he had not viewed all of it, and was basing his assessment on witness and police statements.

On Tuesday, Putney said officers were executing a search for a man with outstanding warrants when they witnessed Scott get into a car with a handgun. Scott was not the man they were looking for, but police engaged him when he then got out of and back into the car with the gun, Putney said.

Officers approached Scott and gave him multiple warnings to drop the weapon, Putney said. Scott then attempted to get out of the vehicle with the gun in his hand, which is when he was shot by Officer Brentley Vinson, who is black and has been placed on administrative leave, as is standard procedure in such cases. Vinson has been with the department for two years.

WBTV reported Vinson is a second-generation police officer in Charlotte.Putney said officers called for medical help immediately after the shooting. He said he hoped a thorough explanation of the shooting will help calm the unrest in the city.

“It’s time to change the narrative,” Putney said Wednesday. “The story is a little bit different than it’s been portrayed so far.”

Putney may have been speaking in response to a woman claiming to be Scott’s daughter, who streamed the aftermath of the shooting live on Facebook, saying, “The police just shot my daddy four times for being black.”

The video has already been viewed more than half a million times and shows frustration building from members of the community, looking for answers. “A life has been lost today, a life was taken and y’all want to block everybody out!” one community member said in a Facebook video.

Scott’s sister said he was unarmed and was reading a book while waiting for his son to get off the school bus, when police approached him.

At a news conference following the press availability of Charlotte officials, Barnett said Scott was just waiting at the bus stop for his kid when officers approached him.

Barnett and other civil rights leaders said that while they don’t encourage violent protests, they understood why people in Charlotte are on edge. He cited as an example the shooting of Jonathan Farrell, an unarmed former college football player shot 12 times by police in Charlotte after he left his wrecked car seeking help from a nearby home.

Barnett said the Scott shooting was part of a larger pattern of injustice.

An outspoken leader of the Nation of Islam, B.J. Murphy, called for an economic boycott of Charlotte at the press conference over the Scott shooting.

Court records indicate that Scott had a criminal record including an assault conviction.Mecklenburg County records matching Keith Lamont Scott’s name and birth date show Scott was charged in April 2004 with multiple counts, including felony assault with a deadly weapon. Records show that most of the charges were dismissed, and he pleaded guilty to a single charge of misdemeanor assault with a deadly weapon.

Records from nearby Gaston County show that Scott pleaded guilty to driving while impaired in 2015.

A woman who identified herself as an advocate for Scott’s family, Annette Albright, said at a news conference that he shouldn’t be “re-victimized” because of things he did in the past.

She told reporters: “What he was doing at the time of the shooting is what’s relevant.”