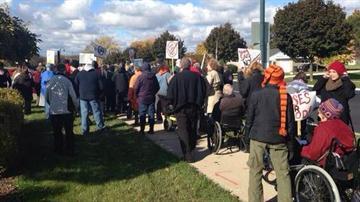 Nearly 100 people gathered off of Edgerton Avenue, near Southridge Mall to protest the relocation of a bus stop.

Southridge Mall management moved a bus stop further away from the mall's entrance back in November and people were initially upset because it meant a longer walk to the mall, many are still angry about the decision. Saturday afternoon those protests continued.

Many think the move was done to prevent the handicapped and elderly from shopping at Southridge.

\"This is a morale issue, basically we don't treat the elderly the way they are being treated by Southridge,\" said Jursik.

Jursik tells us the next step is to try to determine if moving the bus stop is even legal because of the requirements of American with Disabilities Act.