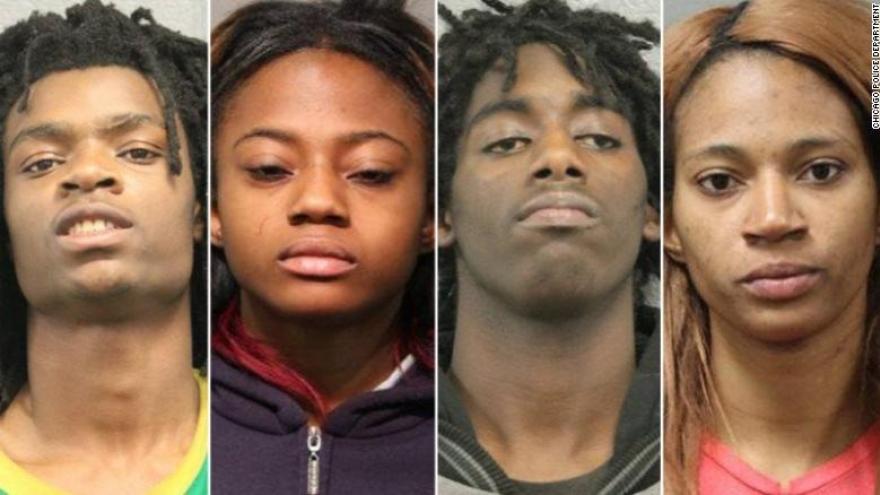 CHICAGO (CBS NEWS)-- A judge has denied bond for four suspects accused in the beating of a mentally disabled man broadcast live on Facebook.

The four appeared before Cook County Associate Judge Maria Kuriakos Ciesil on Friday afternoon, when she asked them “Where was your sense of decency?”

Prosecutors offered new details of the assault, explaining that one of the suspects demanded $300 from the victim’s mother and that the beating started in a van and continued at a house.

The suspects are accused of forcing the victim to drink toilet water and kiss the floor, stuffing a sock into his mouth, taping his mouth shut and binding his hands with a belt.

The four are charged with hate crimes and aggravated kidnapping and battery, among other charges. Authorities say the four black suspects assaulted the white suburban teenager, threatening him with a knife and taunting him with profanities against white people and President-elect Donald Trump.

The suspects include Brittany Covington and Tesfaye Cooper, both of Chicago, and Jordan Hill, of suburban Carpentersville. All are 18. A fourth suspect was identified as Covington’s 24-year-old sister, Tanishia Covington, also of Chicago.

Extra security at the hearing included about a dozen sheriff’s deputies.

Chicago police said drug use may have played a role in the beating. Chicago Police Commander Kevin Duffin said the video of it shows two suspects smoking cigars that authorities “presume to be blunts.” Duffin says the video shows the two sisters smoking while the victim is tied up, and at the same time racial slurs and references “to his mental capacity starts coming out.”

Police say the parents of the young man who was beaten received text messages while he was missing from someone claiming to be holding him captive. The victim’s parents reported their 18-year-old son missing on Monday in Streamwood, a Chicago suburb.

While investigating the messages, police discovered the Facebook video.

The parents said they hadn’t heard from their son since New Year’s Eve, when they dropped him off at a McDonald’s, expecting he was going to meet a friend and sleep over the friend’s house. His mother told police she feared her son hadn’t taken medication for a mental health disorder. Prosecutors said the victim, an 18-year-old man, suffered from schizophrenia and attention deficit disorder, according to CBS Chicago.

The police report said the victim’s mother knew the first name of her son’s friend - Jordan - but wasn’t clear on his last name. The report also noted that the victim “does not like telling his parents who he’s with.”

Speaking Thursday, police Cmdr. Kevin Duffin said the victim was friends with suspect Hill, and the two had attended school together at one point. Duffin said Hill stole a van and picked the victim up from the McDonald’s, driving him to Chicago. Duffin said Hill drove the van around Chicago for the next few days, and the the victim slept in the van. The victim thought the vehicle belonged to Hill, he said.

On Tuesday, Duffin said, Hill drove to the West Side home of the Covingtons, who are sisters. The alleged assault began there and escalated from a “play fight” between the victim and Hill, Duffin said.

Excerpts of the video posted by Chicago media outlets show the victim with his mouth taped shut slumped in a corner as at least two assailants cut off his sweatshirt and others taunt him off camera. The video shows a wound on the top of the man’s head, and one person pushes the man’s head with his or her foot. A red band also appears to be around the victim’s hands.

During much of the video, the victim does not appear to make any attempt to defend himself or to escape his attackers.

A second video, which surfaced on Twitter, showed the suspects grabbing the teen’s head, shoving it into a toilet, and forcing him to drink, reports CBS Chicago. Duffin said the teen was bound in a corner for about four or five hours. Eventually, a downstairs neighbor called police to complain about noise. The Covington sisters became angry with the neighbor, went downstairs and kicked in her door, Duffin said.

That’s when the victim was able to escape. Chicago police said they found him wandering disoriented in a tank top and shorts in cold weather, bloody and beaten. Duffin said the victim was “traumatized.”

“Let me be very clear – the acts in that video are reprehensible,” Chicago Police superintendent Eddie Jones said at a Thursday press conference announcing the charges.

An online fundraising effort to help the victim has pulled in more than $50,000 -- and the amount continued to climb on Friday.

Two of the suspects were arrested as juveniles on armed robbery and other serious charges.

Hill was arrested in 2015 on allegations of armed robbery, possession of a stolen vehicle and residential burglary. Chicago police said they did not know the disposition of those arrests by suburban officers.