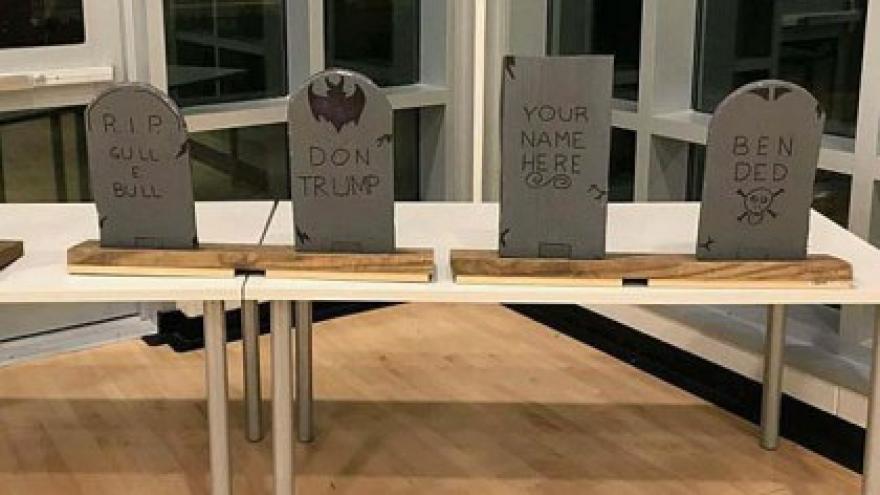 GLOUCESTER (CBS) – An elementary school principal in Gloucester is apologizing for a controversial Halloween display at a school party.

The parent teacher organization hosted a fundraiser at West Parish Elementary School Friday night and one of the parents brought in a bean bag toss game that included fake tombstones.

One of them had the name “Don Trump” on it.

Offended parents sent pictures to Massachusetts Republican Party committeewoman Amanda Orlando Kesterson, who shared one of the photos on Facebook.

“Politics does not belong in an elementary school–any politics,” she told WBZ NewsRadio 1030’s Kendall Buhl. “But it’s particularly egregious to be putting the name of the sitting US president on a tombstone.”

Principal Dr. Telena Imel apologized in a letter to parents.

“Intentionally or not, it inappropriately brought a political agenda into what was designed to be a fun family affair,” Imel wrote.

“Our school, and this includes school events sponsored by related groups, is not the place for politics. In planning future events, it will be made clear to organizers that school is not the place to engage in or to display political agendas or opinions.”

The parents involved have since apologized, and Kesterson says she’s satisfied.  She feels the resulting discussion over what is appropriate political commentary has been a good thing.

“The City of Gloucester does not condone political messaging within our schools.” Gloucester Mayor Sefatia Romeo Theken said in a statement Monday.

“We share the sentiments outlined in recent school administration statements and have made our expectations clear. We support the Superintendent’s Office in their efforts to provide a meaningful resolution and believe that the school administration is responding appropriately toward our community.”