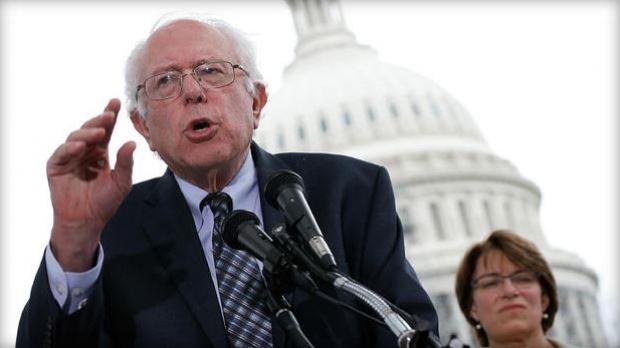 Bernie Sanders has been running for president for two months, but Wednesday night in Madison, Wisconsin, his long-shot campaign got real.

When Sanders walked on stage at the Veterans Memorial Coliseum, he was greeted by a raucous, howling crowd of 9,600 people, according to Sanders' campaign aides and arena staff.

A clearly energized Sanders, who late last year was speaking to crowds of 50 people in Iowa classrooms, appeared taken aback by the reception he received.

Sanders' campaign has been organizing the event for weeks, but just recently started telling reporters that 9,000 people signed up to attend.

Sanders delivered what amounted to his standard stump speech -- a liberal message that pledges to fight for universal health care, break up the biggest banks in the United States and redistribute wealth from the richest Americans to the middle class and poor.

\"What I would like to ask of you: Please think big, not small,\" Sanders said, referring to the audience as his \"brothers and sisters.\"

Calling for a \"political revolution,\" Sanders added, \"there is nothing that we cannot accomplish.\"

Sanders, who is rising in the primary polls and trails only Hillary Clinton, only mentioned the former secretary of state once in his speech.

Sanders worked the rope line after the event -- something the Vermont senator rarely does.

\"The message is resonating, not just in Wisconsin, but all over America,\" Sanders told CNN. \"The people are sick and tired of establishment politics, establishment economics. They want real change.\"

Supporters were impressed by the performance.

\"I felt like, this time, I want to be more of a participant in the election than I have been in the past,\" said Bethany Ragains, 24, who lives in suburban Chicago. \"I really felt a connection with Bernie on the issues. He makes me want to get more involved.\"

Outside the event, Sanders' volunteers handed out stickers, sold t-shirts and, most importantly for the campaign, collected crucial data on each attendee. In addition to registering for the event through the Sanders' website, each person who walked in the door provided the campaign with their name, email, phone number and zip code.

That is new for Sanders' operation; until recently the campaign was not collecting data on people who attended a speech or rally. But now that Sanders is drawing sizable numbers of people to events, his campaign is looking to translate the big turnouts into increased fundraising and an army of volunteers.

Sanders closed his speech on Wednesday with a call to action that received the biggest applause of the night.

\"I am more than aware that my opponents will be able to outspend us. But we are going to win this election,\" Sanders said. \"They may have the money, but we have the people. And when the people stand together, we can win.\"

Sanders now heads to Rochester, Minnesota, for another rally.