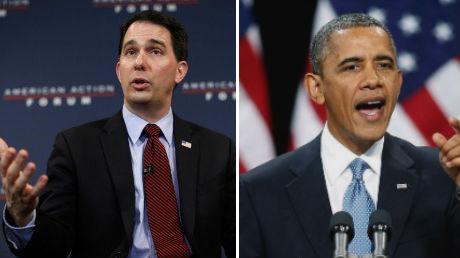 Scott Walker seems to be getting under the President's skin.

President Barack Obama has taken several public jabs at the Republican Wisconsin governor and likely 2016 presidential candidate over the last month, chiding Walker on issues ranging from foreign policy to a \"right to work\" bill in Wisconsin.

With his direct and repeated criticism of Walker, the President sounds like a man newly liberated to hit back at political detractors and determined to defend his legacy as he enters the last quarter of his eight-year presidency.

But his swipes may also have the effect of elevating Walker within his party's presidential field and signaling that the governor is a formidable candidate, all as the conservative governor prepares to join the crowded group of Republicans vying for the presidential nomination.

In the most recent in a string of digs, the President this week slammed Walker for taking a \"foolish approach\" to the country's nuclear negotiations with Iran, coolly suggesting the governor might benefit from taking \"some time to bone up on foreign policy.\"

When Walker signed in to law a controversial \"right to work\" bill in March, Obama called the state legislation \"anti-worker\": \"Even as its governor claims victory over working Americans, I'd encourage him to try and score a victory for working Americans,\" the President said in a statement.

And at the annual Gridiron dinner in Washington, it was a more self-deprecating joke -- at Walker's expense. \"Gov. Walker got some heat for staying silent when Rudy Giuliani said I don't love America, which I also think is a problem,\" Obama said. \"Think about it, Scott. If I did not love America, I wouldn't have moved here from Kenya.\"

Bill Daley, Obama's former chief of staff, said the President's criticism of Walker shows that Obama has a freer hand compared to earlier in his term.

\"I don't think the President's just going to sit there and be a punching bag for the next year or two for these characters,\" Daley said, warning that Republican candidates would try to outdo each other by being \"more outrageous\" in their attacks on the President.

Asked Tuesday whether the president has an issue with Walker, White House press secretary Josh Earnest said the recent digs were \"nothing personal.\"

\"But there's no doubt, as I'm sure that even Governor Walker himself would be happy to tell you, that there are significant policy differences between the two men,\" Earnest told reporters at a White House press briefing. \"And there will be ample opportunity over the course of the next year or year and a half for us to discuss those differences.\"

Some Republican strategists point out, however, that Obama's choice to take on Walker from his bully pulpit could suggest that Democrats see the Wisconsin governor as a serious opponent.

Walker has benefited at other points in his career from the antipathy of high-profile Democrats: If not for a union-backed effort to boot him out of office in a 2012 recall election, it's unclear whether Walker would enjoy his current level of popularity among conservatives nationwide.

At the very least, Obama's decision to engage Walker is having the effect -- intended or not -- of drawing attention to the governor's remarks at a critical stage of his not-yet-announced campaign.

\"Nice for Walker that the President is so thin-skinned that he feels the need to repeat and amplify what an undeclared Republican candidate has said,\" said Danielle Pletka, senior vice president of foreign policy at the conservative American Enterprise Institute.

Obama's tangling with Walker over the Iran negotiations also highlights the belief among some of the governor's critics that foreign policy could emerge as one of the most vulnerable weak spots for the Republican.

But Walker hasn't hesitated to take on international topics in recent interviews.

The second-term governor has said he would disown any deal the United States may strike with Iran over the country's nuclear program. Pressed by radio host Charlie Sykes last week on whether he would do so even if U.S. trading partners were opposed to re-imposing sanctions against Tehran, Walker's response was, \"Absolutely.\"

\"If I ultimately choose to run, and if I'm honored to be elected by the people of this country, I will pull back on that on January 20, 2017.\"

Walker, who earned the reputation of a political survivor after fending off the recall effort, hasn't been extensively tested in the national arena.

But Walker has also suffered from a few early missteps, drawing mockery for his claim that fighting unions in Wisconsin prepared him to do battle with ISIS, as well as for calling Ronald Reagan's decision to fire air traffic controllers the most important foreign policy action of Walker's lifetime.

Patrick Guarasci, a Democratic strategist based in Milwaukee and a vice chairman of finance for the Democratic National Committee, said those comments illustrate Walker's shallow grasp of foreign affairs.

\"The President ... has put together a tremendous historic opportunity with Iran and he's not going to let somebody who doesn't really understand foreign policy take pot shots from the peanut gallery and get away with it,\" Guarasci said.

After Obama slammed Walker for his Iran comments in an interview with NPR that aired Tuesday, the governor struck back, scolding the President for cutting a \"bad deal\" with Iran.

\"President Obama's failed leadership has put him at odds with many across the country, including members of his own party, and key allies around the world,\" Walker said in a statement. \"Americans would be better served by a President who spent more time working with governors and members of Congress rather than attacking them.\"

Obama, with no political races left in his future, seems to be relishing the opportunity to take on his Republican foes one last time.

Daley, a longtime ally of Bill and Hillary Clinton, said that until Hillary Clinton's presumed campaign for the Democratic presidential nomination is fully up and running, the President remains the most obvious bogeyman for Republicans, and there's no reason for Obama to take it sitting down.

\"This is freedom,\" Daley said. \"He has that in a whole host of ways that you don't have in the first four years.\"