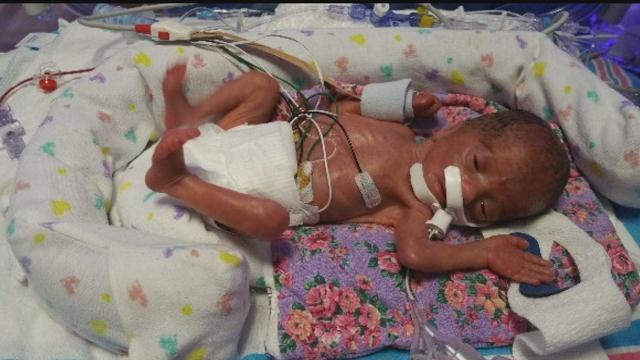 Inside a nursery, sounds of a lullaby, but not of newborn babies.

Justin and Kelly Trzebiatowski's twins were born about three months premature on December 13.

"They came out both crying, both eyes wide open, looked right at me," said Justin.

"I was able to give them a kiss before they took them away," Kelly said.

At a little more than a one pound, Kendall Rose and Sophie Marie are in the NICU at the Aurora Women's Pavilion in West Allis. The first-time parents can see them every four hours, feeding them, changing diapers and something new Monday night.

"They're going to allow us to help give them a bath and this is going to be the first bath," said Justin.

Their time in the NICU is expected to be about 100 days.

The unplanned emergency forced Kelly to stop working and not get paid for maternity leave. She's a second year teacher with MPS.

"The only paid time off I get is through my sick leave which is not much because I've only worked there for two years," she said. "So I don't have much accrued."

"My work as the father of my kids is giving me more maternity time off than she gets," said Justin. "That's a little bit crazy."

Kelly is taking 12 weeks unpaid through the Family and Medical Leave Act, or FMLA, splitting it up between now and after the holiday, when the twins finally come home.

"Everyday that we have with them being healthy and progressing is a blessing and a gift for us," Justin said. "I think that's going to be the greatest Christmas present that we could get."

We checked with an MPS spokesman, who said the district offers leaves of absence, including a paid sick leave benefit that can be applied for things like maternity leave or other qualifying FMLA purposes.

The parents have set up a Go Fund Me account to help with expenses. You can help by clicking here.