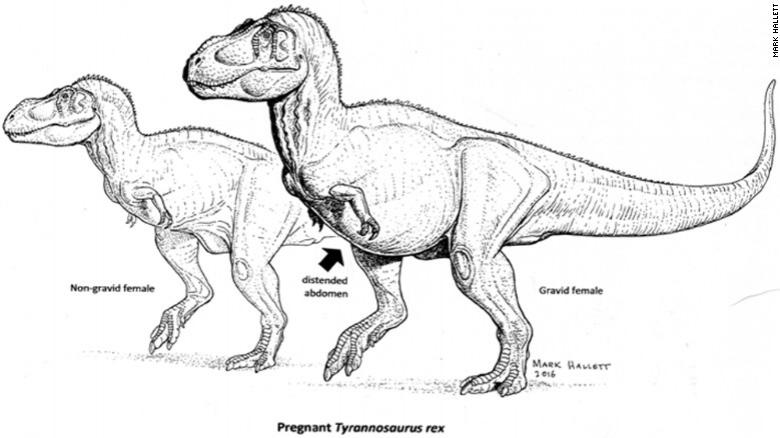 (CNN)Through the years of searching for fossils of the ever-popular Tyrannosaurus rex, locating a pregnant one has been understandably difficult.

Traditionally, it's been extraordinarily difficult to figure out a dinosaur fossil's gender.

Specifically, the researchers from North Carolina State University and the North Carolina Museum of Natural Sciences found a medullary bone in a T. rex femur.

These bones are found only in female birds in the period before or during egg-laying.

Now, the scientists believe they will be able to find differences between male and female dinosaurs of this kind (theropod dinosaurs), and learn more about the evolution of egg-laying in birds.

"It's a dirty secret, but we know next to nothing about sex-linked traits in extinct dinosaurs. Dinosaurs weren't shy about sexual signaling, all those bells and whistles, horns, crests, and frills, and yet we just haven't had a reliable way to tell males from females," said Lindsay Zanno, a Museum of Natural Sciences paleontologist, in a press release.

"Just being able to identify a dinosaur definitively as a female opens up a whole new world of possibilities. Now that we can show pregnant dinosaurs have a chemical fingerprint, we need a concerted effort to find more."