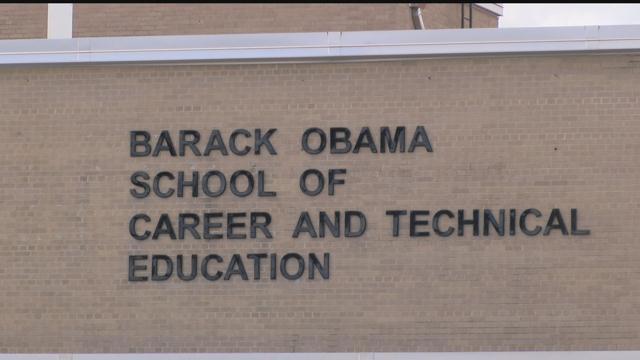 A 16-year-old pregnant girl could face charges after police say she kicked a paramedic in the stomach Wednesday afternoon.

It happened after a huge brawl at the Barack Obama School of Careers and Technical Education. Milwaukee police have issued 13 'disorderly conduct' citation to students involved with the fight, Sgt. Timothy Gauerke said.

Only one squad car sat outside of the high school formerly known as 'Custer' on Thursday afternoon.

Also, tenth grader Stephon Davis stood on the sidewalk waiting for his parents to take him home.

He has a cut lip and says he got it after confronting a teacher about choking his eight-year-old brother.

"One of the security guards came out of nowhere and started grabbing me like this," he said, grasping the sides of his jacket.

"He was choking me up and he pushed me outside, busted my lip," Davis said.

He says security may be high strung after Wednesday's fight which involved as many as forty students. Many of them pregnant and enrolled in specialized coursework at the school.

"What we're seeing is deeper than what's being shown," community activist Tony Lowe said. He has community connections and is commonly looked to for support or problem solving.

"I think it's through years of neglect, lack of funding. Years of just ignoring some of the issues, some of the tough issues," Lowe said.

"And now you're seeing what you can't sweep under a rug anymore," Lowe said.

Lowe says he is advocating for more discussion on ways to improve Milwaukee Public Schools. He's calling on parents and teachers to demand action - including better funding.

He admits it's difficult as this story makes the rounds on the conservative blogosphere.

"The school is named 'Obama school' so I think a lot of people on the right wanna attack Obama using this situation," Lowe said.

Police say there were no major injuries, however, a pregnant student is being ordered to the the Milwaukee County Children's Center to face possible charges after kicking a female paramedic.

Davis, who is 17-years-old, said it is difficult to attend the school right now.

"Yesterday was crazy. They got kids on lock-down, couldn't really do nothing. They were talking about canceling homecoming just because it was a huge breakdown," Davis said.

"We as students should be able to come to school, learn, get our education and not have to deal with other students fighting or teachers even not doing anything about it," Davis said.

There were no weapons involved in that brawl, Sgt. Gauerke said.

Milwaukee Public Schools is not commenting on the incident other to say that they are disciplining students who were involved.