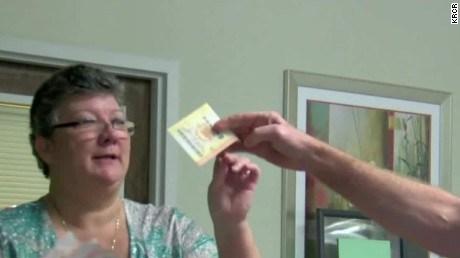 (CNN) When it comes to pranks this one is especially cruel.

A California nurse who thought she was one of the lucky three Powerball winners learned she was pranked by her son.

Her son is said to have texted his mother with a photo of the ticket and said that she had matched all six numbers on Thursday.

Things snowballed quickly from there. The woman's employer acknowledged the supposed win, even though lottery officials hadn't confirmed it.

"We were all talking about the Powerball and who would have thought that the actual winner would have been here at our facility. Having her win couldn't have happened to a nicer person," David Levy, administrator at Park Avenue Health in Wellness in Pomona, California, told CNN on Thursday.

The ticket was from nursing home owner Shlomo Rechnitz, who gifted nearly 18,000 tickets to his employees and residents across dozens of nursing homes.

The woman, who has not been named, reportedly celebrated with her colleagues at the nursing home. She completed her shift even though she believed she had won, according to CNN affiliate KABC.

California lottery officials were skeptical about the reports of that the nursing home worker had won the ticket.

The California winner of the jackpot has not yet come forward to collect his or her prize, according to Elias Domingez, spokesman for the California Lottery.

What became of the prankster son? We can only wonder what happened at home when his mother found out.

Sadly, this isn't the first misfortune when it came to the Powerball this week.

An employee at Grissini Ristorante in Englewood Cliffs, New Jersey, read aloud the Powerball numbers from one of the tickets they had bought as a pool in Saturday's drawing.

All of the numbers matched. The group erupted into cheers, jumping up and down at the restaurant bar. They thought they would each get $22 million in winnings, they told CNN affiliate WPIX.

The restaurant workers were on their phones looking at what turned out to be numbers from the previous drawing. The set of numbers online had not yet been updated.

And on Friday, a couple from Munford, Tennesee, appeared on the TODAY Show, clutching what they say is a winning ticket from the $1.5 billion drawing this week.

We hope they're not wrong. We've had enough Powerball misfortune for one week.