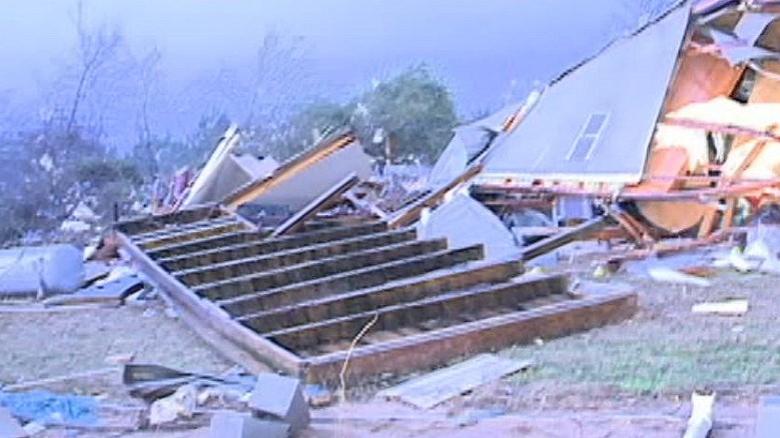 (CNN)Tornadoes in the South. Frigid temperatures and snow up North.

Welcome to the first weekend of 2015 across the United States.

\"This arctic cold is potentially deadly and dangerous,\" CNN meteorologist Karen Maginnis said Sunday. \"Wind chills in Minnesota and the Dakotas are as low as minus 45 degrees. And a second blast of cold air will reinforce the deep freeze on Tuesday.\"

Central Mississippi, meanwhile, was cleaning up Sunday after severe weather raked the state a day earlier.

Folks in Jasper County were among the hardest hit.

Craig Youngblood said a tornado missed his house by about 50 yards.

\"We got pretty lucky,\" he told CNN affiliate WAPT. \"We had a safe room in the house and we were all in there.\"

Mary Magee was on the porch with her grandkids when the funnel cloud approached.

\"There was nowhere to hide, nowhere to go,\" she said. \"And when they saw that thing coming, they came screaming and hollering.\"

The storm system is dropping massive amounts of rain across the Southeast.

Forecasters are worried about possible flooding in Mississippi, Alabama, Tennessee and Georgia.

Flash flood warnings are in place for five counties in northwest Georgia where up to 4 inches of rain may fall.

While the South is soggy, brutal cold is settling across the nation's northern realms and sinking deep into its midsection. Wind chill advisories are in place as far south as the Texas Panhandle.

Sunday's forecast includes highs of 2 degrees Fahrenheit in Omaha, Nebraska, minus 1 in Minneapolis and minus 7 in Fargo, North Dakota. Wind chills are in the negative double digits across the northern Plains.

\"Some of the strongest winds in recent memory for southeast Wyoming are coming up today through Tuesday, with wind gusts as high as 85 mph,\" Maginnis said. \"The area includes Cheyenne and Laramie. Interstate 80 will see blizzard conditions.\"

Rough conditions are on the way in other areas too.

A storm system will bring a mix of snow, sleet and freezing rain to parts of upstate New York and New England.

In the Midwest, snow will also coat portions of Wisconsin, Illinois, Indiana and Michigan.

The South is in for it too. \"Another reinforcement of the polar air will move its way into the lower 48 this week, plummeting temperatures in the Deep South to below freezing on Thursday into Friday,\" said CNN meteorologist Michael Guy.