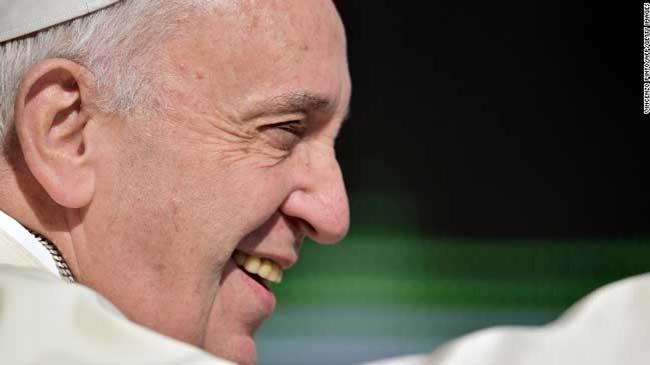 Washington (CNN)Pope Francis urged the United States not to turn its back on undocumented immigrants, to reject the victimization of religious and ethnic minorities, to overcome income inequality and to save the planet from climate change, citing Scripture and the nation's founding ideals in a historic address to Congress Thursday.

Francis, who then swapped the corridors of power for a humble lunch with homeless people, also asked lawmakers to wage a constant battle against poverty and to ensure the wealth of the world is equitably shared and used to create jobs.

Francis, who is on a six-day U.S. visit and is the first-ever pontiff to address a joint meeting of Congress, was watched not only by a packed chamber of lawmakers but also thousands of people who gathered outside the Capitol to follow the speech on big screens erected on the National Mall.

He later appeared on the Speaker's balcony, saying "Buenos Dias" and making brief remarks in Spanish before blessing the crowd below.

The Pope, who was greeted by cheers as he stepped onto the floor of the House of Representatives, did not scold lawmakers, as his tough words on political topics at the White House Wednesday suggested he might. Instead, speaking in English rather than his native Spanish, he delivered a speech that evoked a sermon or even a pep talk.

Using the podium of the House as a pulpit, he repeatedly couched the most politically divisive issues in U.S. public life in the context of the lessons of the Bible and the example of American heroes, including Abraham Lincoln and Martin Luther King, to encourage his audience to live up to the country's highest ideals.

While he referred to traditional Catholic priorities like opposition to same-sex marriage and abortion in passing, he argued that the faithful also had a duty to be engaged on other politically controversial social issues, like opposing the death penalty and forging a more equitable society to benefit those "trapped in a cycle of poverty."

Citing his own national heritage as an immigrant and his Argentine roots, Francis reminded his audience that undocumented migrants were human beings. At times this summer, the millions of people living in the shadows in the United States have been singled out in the heat of the presidential campaign.

"We, the people of this continent, are not fearful of foreigners, because most of us were once foreigners," he said, as Vice President Joe Biden and Republican House Speaker John Boehner, both Catholics, watched him deliver a speech punctuated by several standing ovations and repeated applause.

"I say this to you as the son of immigrants, knowing that so many of you are also descended from immigrants," Francis told the audience of lawmakers, top military brass, Supreme Court justices and Cabinet members on the floor of the House.

Francis, who was greeted on the streets of Washington Wednesday by tens of thousands of exuberant admirers, made a clear connection between undocumented immigrants in the U.S. and the human exodus of Syrians and others into Europe from wars raging in the Middle East.

"On this continent, too, thousands of persons are led to travel north in search of a better life for themselves and for their loved ones, in search of greater opportunities," he said of migrants from Central and South America, indicating they needed to be treated as people seeking refuge rather than as exploiting the United States' porous borders.

He continued, "We must not be taken aback by their numbers, but rather view them as persons, seeing their faces and listening to their stories, trying to respond as best we can to their situation."

Francis also appeared to reflect on news coverage of racial violence over the past year and a debate over the place of Muslims in U.S. society that arose in recent weeks.

Citing Martin Luther King's "dream of full rights for all their brothers and sisters," he urged Americans to remember the civil rights icon's legacy of "liberty in plurality and non-exclusion."

Referring to turmoil tearing apart the Middle East, Francis warned the world was increasingly a place of fundamentalism and "brutal atrocities" sometimes committed in the name of religion, but he warned against a simplistic world view pitting good versus evil or "the righteous and the sinners."

Clearly conscious that many conservatives in Congress are skeptical that mankind is contributing to global warming, he called for a courageous and responsible effort to avert "environmental deterioration caused by human activity" and said Congress had an "important role to play."

But he cautioned that wealth should be shared and geared to "the creation of jobs as an essential part of its service to the common good."

He did, however, cut one section of his prepared speech, in which he referred to the Declaration of Independence and said that politics should not be a "slave to the economy and finance."

The Pope also counseled members of the unpopular and divided Congress of the need to move forward together in a generous spirit of fraternity.

"The challenges facing us today call for a renewal of that spirit of cooperation, which has accomplished so much good throughout the history of the United States," he said.

Francis, who will take part Sunday in a World Meeting of Families in Philadelphia on the last stop of his trip to the United States, also made an oblique reference Thursday to the increasing prevalence of same-sex marriage, which the Supreme Court endorsed nationwide earlier this year.

"I cannot hide my concern for the family, which is threatened, perhaps as never before, from within and without," Francis said. "Fundamental relationships are being called into question, as is the very basis of marriage and the family."

The Pope drew cheers, especially from the Republican side of the House, when he spoke of the need to "protect and defend human life at every stage of its development," in a reference to abortion.

But he earned only a smattering of applause when he said that reverence for life also means supporting the global abolition of the death penalty. Francis threw his weight behind efforts to pass criminal justice reform, saying society "can only benefit from the rehabilitation of those convicted of crimes."

There were also signs of a partisan split in the chamber when Francis mentioned global warming and immigration, which Democrats applauded while many Republicans did not.

The Pope also sought to atone for some of history's wrongs: "Tragically, the rights of those who were here long before us were not always respected."

The comments came a day after he canonized an 18th-century Spanish missionary who is credited for bringing Christianity to California but who treated Native Americans harshly.

After his lunch with the homeless at a Catholic charity in Washington, Francis will head to New York where he will ride his popemobile through Manhattan and lead evening prayers at St Patrick's Cathedral.

But before he left Capitol Hill, he appeared on the Speaker's balcony and said a prayer -- singling out children in the crowd for special blessings.

Speaking through a translator, he asked even those who had no faith to send him good wishes anyway. He then broke into English, with a huge smile, saying, "God bless America!"