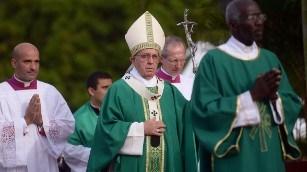 Washington (CNN)America may be in for some tough love from the Pope.

After a lifetime of watching the world's most affluent and powerful nation from afar, Pope Francis will walk on U.S. soil for the first time, at the age of 78, when he arrives in Washington from Cuba on Tuesday afternoon.

He's assured of a warm welcome from millions of U.S. Catholics, and his poll numbers -- which would be the envy of any politician -- suggest that curious adherents of other faiths and even the nondevout are also eagerly awaiting his visit.

But the first Latin American pope's blessings on America could also contain uncomfortable challenges as he addresses a country that encapsulates many of the ills he has denounced as the head of one of the world's largest religions. Though there are aspects of American life that Francis embraces, he has quickly become known for blunt critiques of contemporary society and global economics, and his criticism -- from capitalism to climate change to technology -- spans the political spectrum.

"Pope Francis is the ultimate Washington outsider. His priorities are not Washington's priorities," said John Carr, director of the Initiative on Catholic Social Thought and Public Life at Georgetown University. "We think we are the center of the world. We are not the center of Pope Francis' world. He is frankly more comfortable in the slums of Argentina than in the corridors of power."

From the flurry of encyclicals, writings and other commentary that Francis has issued since his election two years ago, the United States, home to the world's mightiest market economy, a ravenous consumer culture and nurturer of the World Wide Web, appears to represent much of what he abhors.That's why Francis faces a delicate political assignment as he meets President Barack Obama and addresses Congress, in addition to holding masses and other public events in Washington, Philadelphia and New York this week.

Francis is stepping into an intense domestic debate on issues close to his heart, including income inequality, climate change, abortion, the definition of marriage, religious freedom and immigration. Rival politicians are sure to exploit his visit for their own purposes, and the messages he imparts could potentially reshape how those issues figure in the presidential campaign.