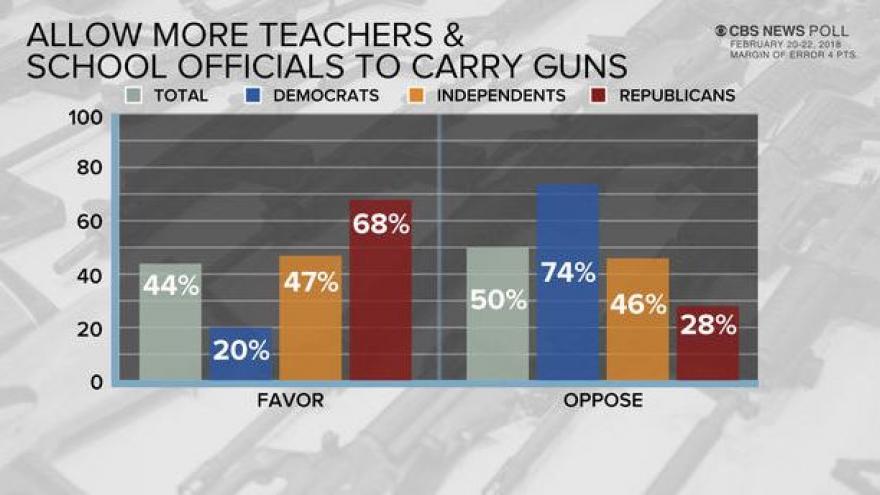 (CBS News) -- Nearly two-thirds of Americans support stricter laws on gun sales, including an increasing number of Republicans, but the public divides on the idea of allowing more teachers and school officials to carry guns. Arming teachers draws partisan splits, with Republicans in favor and Democrats opposed, a CBS News poll reveals.

And a majority of Americans (53 percent) says that unfortunately, mass shootings are something they have come to expect. Most parents say they are very concerned about gun violence in schools.

Sixty-five percent of Americans now say laws covering the sale of guns should be stricter - an eight-point increase from December. It is the highest number recorded in this poll for stricter gun sale laws. The rise has been primarily among Republicans and independents, with a large increase among Republicans from last December. Democrats remain in favor. 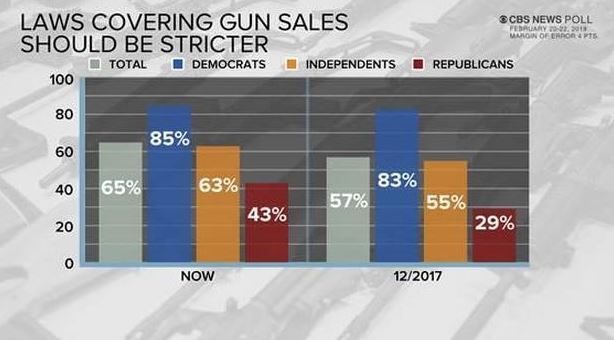 Forty-one percent of Republicans say they would follow Mr. Trump if he supported stricter laws, but most of these Republicans already favor stricter gun sale laws to begin with.

However, most Americans who support such stricter gun laws (59 percent) are pessimistic about the prospect of the president and Congress enacting them in the near future. A third are optimistic.

Mr. Trump gets mostly negative - and heavily partisan - marks for his handling of the Florida school shooting. Seven-in-ten Republicans approve while Democrats, and a plurality of Independents, do not.

Americans divide over the influence of the National Rifle Association. Nearly half feel the NRA has too much influence today, while just as many think the NRA has too little or the right amount of influence. These views are also heavily partisan, and independents split.

More money for better mental health screening and stronger background checks find favor across party lines, and just over half would agree with a ban on bump stocks.

The poll also shows some of underlying reasons that partisans disagree over gun issues: Republicans tend to think the problem of mass shootings stems from not having enough security, Democrats, from there being too many guns.