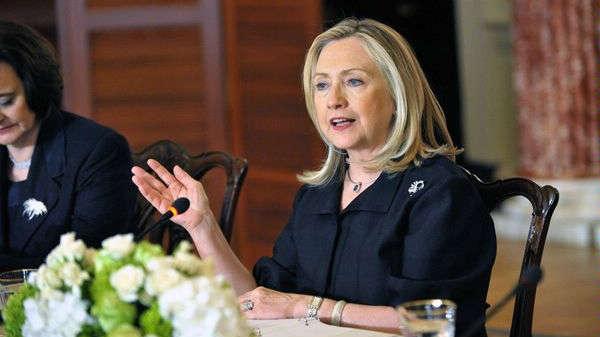 Hillary Clinton continues to be a dominant force heading into the 2016 presidential election, according to a new CNN/ORC poll. The former secretary of state maintains a broad lead over the field of potential Democratic challengers she could face in a nomination contest and sizable advantages over the leading contenders from the Republican side in general election match-ups.

But none of the top candidates in this field gets within 10 points of Hillary Clinton in a series of hypothetical general election matchups.

Rand Paul comes closest, with 43% saying they'd be more likely to back him while 54% choose Clinton.

The two candidates who currently top the GOP field, Bush and Walker, match up equally against Clinton, with each carrying 40% to her 55%. Huckabee gets 41% to Clinton's 55% and Carson has 40% to Clinton's 56%.

In the race for the Democratic presidential nomination, Clinton holds a nearly 50-point lead over Vice President Joe Biden, her closest competitor in the field, 62% to 15%. Massachusetts Sen. Elizabeth Warren rounds out the top three on the Democratic side with 10%. No other potential candidate tops 5%.

Should Warren decide not to get into the race, Clinton stands to benefit more than others, gaining 5 points and holding a 67% to 16% advantage over Biden when Warren's backers are re-allocated to their second-choice candidate. Notably, with Warren out of the race, Clinton surges from 67% support to 74% among Democratic women.

And Democrats broadly believe the party's chances to hold the White House in 2016 are strongest with Clinton; 68% say so, while 30% say the party would have a better shot with someone else leading the ticket.

Though Clinton's favorability rating has taken a hit recently, her prospects in 2016 appear largely unchanged compared to polls conducted before news broke about her use of a personal email address and home-based server while serving as secretary of state.

On the Republican side, Bush leads the pack with 16%, Walker follows at 13%, Paul nearly matches him at 12% and Huckabee holds 10% support. Huckabee's backing has dipped significantly since February, from 16% to 10%, while the others near the top have generally held steady. In single digits, Carson holds 9%, New Jersey Gov. Chris Christie has 7%, and Florida Sen. Marco Rubio has 7%. The rest of the field lands below 5%, including 2012 candidates Rick Santorum at 1% and Rick Perry at 4%.

Some interesting demographic trends emerge in the GOP numbers: There is something of a gender gap in preferences, with both Walker (17% among men, 9% among women) and Paul (16% among men, 7% among women) doing significantly better with men than women. Younger Republicans are more likely to back Paul than older ones (he has 17% support among Republicans under 50, just 7% among older Republicans).

Yet many of the GOP's strongest contenders remain largely unknown. Majorities of Americans haven't yet formed opinions about Scott Walker (58%) or Ben Carson (64%), and about half haven't heard of or don't know about Marco Rubio (48%).

Even the best known Republican contender, Jeb Bush, prompts nearly a quarter of Americans to say they're not sure how they feel about him (23%). Republicans themselves have heard a bit more about their party's top potential candidates, but only one merits a majority favorable rating among Republicans and Republican-leaning independents: Mike Huckabee at 57% favorable.