Poll: Fiorina rockets to No. 2 behind Trump in GOP field 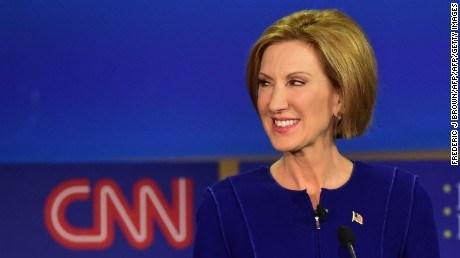 (CNN) Carly Fiorina shot into second place in the Republican presidential field on the heels of another strong debate performance, and Donald Trump has lost some support, a new national CNN/ORC poll shows.

The survey, conducted in the three days after 23 million people tuned in to Wednesday night's GOP debate on CNN, shows that Trump is still the party's front-runner with 24% support. That, though, is an 8 percentage point decrease from earlier in the month when a similar poll had him at 32%.

Fiorina ranks second with 15% support -- up from 3% in early September. She's just ahead of Ben Carson's 14%, though Carson's support has also declined from 19% in the previous poll.

Driving Trump's drop and Fiorina's rise: a debate in which 31% of Republicans who watched said Trump was the loser, and 52% identified Fiorina as the winner.

During the CNN debate, Fiorina clashed with Trump over his personal attacks and their business records and scored points for her condemnation of Planned Parenthood.

The top three contenders underscore a key theme in the 2016 race: In a jampacked GOP presidential field, the leading candidates are the only ones who have never held political office.

But one established politician has seen his standing rise after flashing foreign policy chops on the debate stage. Sen. Marco Rubio of Florida -- identified as Wednesday's winner by 14% of Republicans, putting him second behind Fiorina -- is now in fourth place with 11% support, up from 3% in a previous poll.

Celebrated by conservatives -- in the party's base and its donor class alike -- for his union-busting efforts in Wisconsin, Walker at one point led the field in the key early voting state of Iowa.

His support had already dropped to 5% in a CNN/ORC poll in early September, but the bottom appears to have fallen out completely since then -- with a second flat debate performance coming after criticism of his disparate answers on issues like birthright citizenship.

Carson was a quiet presence in Wednesday's debate, but he remains the most popular candidate in the GOP field, with 65% of Republican voters saying they view him favorably, compared with just 10% saying they have an unfavorable opinion of the retired neurosurgeon.

But Trump still stands out on the issues.

About 44% of likely GOP voters say they see Trump as the candidate who could best handle the economy -- well ahead of his nearest competitors: Fiorina at 11%, Rubio at 10% and Bush at 8%.

Trump also wins on immigration, with 47% saying he could best address the issue, ahead of second-place Rubio's 15% and Bush's 9%.

The poll offered some good overall news for Republicans: 65% of GOP voters said they are either "extremely" or "very" enthusiastic about voting in the 2016 presidential race, compared with 51% of Democrats.

The CNN/ORC poll was conducted September 17-19 and surveyed 1,006 adult Americans, including 924 registered voters -- 444 of whom are Republicans and independents who lean toward the GOP. The margin of error with the Republican results is plus or minus 4.5 percentage points.