BROOKFIELD, Wis. (CBS 58) -- Parents are left in disbelief after seeing a political message with profanity displayed on a truck contracted for a Waukesha County construction project.

Molly Conway says she saw the truck on the North Avenue construction project between Calhoun Road and Pilgrim Road while driving home. She says traffic came to a halt and a truck was pulling slowly into a parking lot when she noticed a mud flap on the truck, which clearly said “TRUMP 2020 F*** YOUR FEELINGS.” 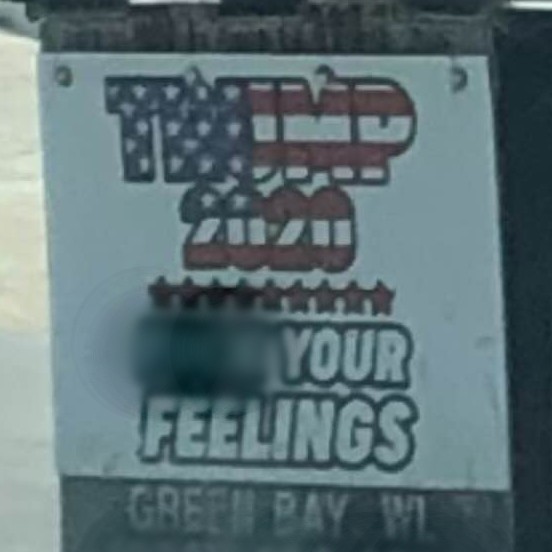 “I could not believe what I thought was a city project -- I now know is a county project -- had workers that would have profanity like that in a neighborhood that is so residential,” adds Conway.

Conway says it’s not the “Trump 2020” part that shocked her. It was the latter part of the sign.

“I don’t have a problem with the political part of it, everybody can support whatever candidate they want, it’s just the profanity and dismissiveness of everybody’s feelings that was upsetting to me,” said Conway.

Conway is a mom of two young boys, and says she’s lucky her boys still can’t read yet, but worries other kids may see it on the busy road.

“I have a nephew who’s nine who lives less than a mile from here who could’ve seen that and can read and would definitely ask his mom what that meant,” Conway says.

A phone number listed on the mud flaps returned as Olson Trailer and Body in Green Bay, the company builds trucks and installs mud flaps for contractors all around the state. They say they do not promote any political party.

The company says in a statement in part:

“The mud flap seen in this video and picture was modified by the end user. Olson Trailer & Body doesn’t tolerate profanity; we are currently investigating the situation and will be taking proper action.”

“I posted it online and everybody’s really upset, it’s not okay for our kids to read messages like that,” adds Conway.

CBS 58 reached out to Waukesha County Public Works, who says they addressed the contractor. The contractor apologized to the county's public works department and said in part:

“That truck was a rental that showed up from the DBE broker. We called the broker to have that truck removed and not return with those mud flaps.”

“Putting the president of the United States’ name on something that says that your feelings don’t matter really makes not only just children but me feel unimportant and that less than,” said Conway.

Waukesha County Public Works tells Conway they are looking into whether or not a citation would be a possibility in the future, they say the sign was inappropriate and reflects poorly on the contractor and its company.