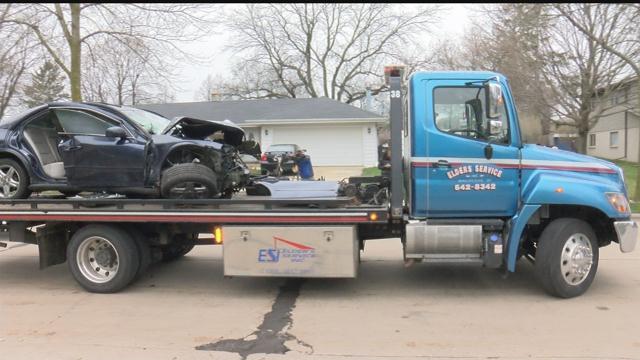 Five teenagers are battling injuries after a violent car crash in Waukesha.

One of them was taken to the hospital by flight for life.

"It literally sounded like a bomb went off," said neighbor Lisa Johnson. "I couldn't even imagine what it was."

"You betcha I heard it. The house almost shook it was a horrific crash," said neighbor Russ Willis.

"I just got out of the car and started crying and went over to see if he was okay," she said. "I saw the other boys and I was just freaking out."

Green markings on Roberta Avenue in Waukesha appear to show the direction of the car before it slammed into a tree. The impact pushed it across the street.

"There were kids crawling out of the car and ambulances and firetrucks," Johnson said. "It was the saddest thing I've ever seen."

Police said there were five Waukesha South High School students inside the car. Savannah Dagostini said her twin brother was the driver.

"He got out of the car and said he tried to see if everyone else was okay," she said. "He ended up helping the one who was [taken by] flight for life because he had blood on his hands and he was trying to help him."

Dagostini said the teen boys were going to Dairy Queen during the open lunch period.

With the school just blocks away, neighbors said it's a busy road and many drivers go faster than the posted 25 miles per hour speed limit.

"I would designate it as a fast road, period," said Willis.

Crews used shovels to clean up car parts in the road. Other pieces were found on sidewalks and a tire ended up in a yard.

But those impacted said the young lives involved is what's important.

"A car can be replaced, everything else can't be," Johnson said.

Waukesha South High School notified parents about what happened. Police are still investigating, but say speed is believed to be a significant factor in the crash.