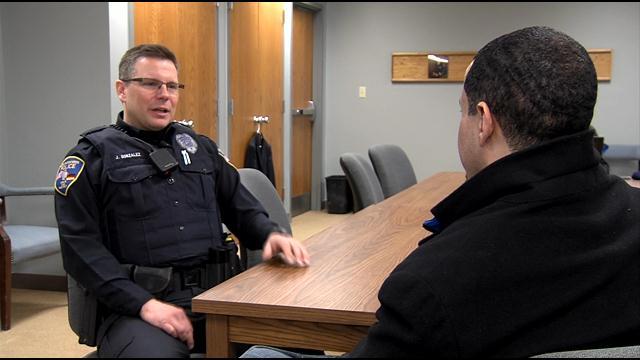 On Friday February 13, 2015, at approximately 12:35 a.m. Germantown Police Officer Jeff Gonzalez while on patrol observed a dog running at large in the area of Fond Du Lac Ave and Knoll crest Circle.

Gonzalez attempted to apprehend the dog with negative results, so Gonzalez continued to follow it around to Knoll crest Circle.

\"He then led me on a chase in the neighborhood a little bit. But I could tell he was a friendly dog\", said Officer Gonzalez.

Gonzalez, while doing this, observed 58-year-old Crystal outside her home dressed only in pajamas and a coat slumped over and unconscious.

Gonzalez immediately ran to her assistance and found that she was breathing but unconscious, along with being cold to the touch indicating that she had been outside exposed to the elements for a long period of time.

\"Very cold to the touch. Her skin was pail. Looked blue\", said Officer Gonzalez. \"As I am walking up, I thought she was deceased.\"

Gonzalez immediately requested the Germantown Rescue Squad and other officers for assistance.

Officer Gonzalez and Officer Suedkamp then carried the victim into her residence.

During the course of the incident investigation it was found that Lauer had gone outside with her dog approximately two hours earlier and due to a medical condition had fallen unconscious outside the front of her residence .

\"We think that some of the medication she's taking for a number of medical conditions\", said Torrey Lauer. \"I don't know. Something happened with the medication., and it caused her to be unconscious.\"

The victim was treated at the scene by Germantown Fire Department rescue and was subsequently conveyed to Saint Luke's Hospital by family members.

Crystal Lauer is still being treated at Saint Luke's Hospital.

Lauer's family told CBS 58 that she is expected to be okay.