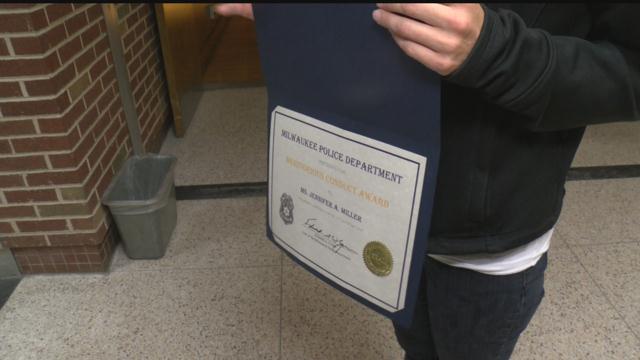 In a city of around 600,000 people, there are bound to be a lot of great people who are doing great things. The Milwaukee Police Department (MPD) held its merit award ceremony, Wednesday, at the police academy. That's where police officers and citizens were honored for their bravery.

Jennifer Miller was given a Meritorious Service Award for what happened near the corner of 16th and Lincoln back in the middle of January. She was sitting at that intersection and watched as a group of guys tried stealing a woman's purse.

"A very big adrenaline rush, it was scary at the same time not knowing what was going to happen," Miller said. "In the meantime, I kinda beeped, scared them a little bit, startled them, let her know that I was there to help her."

With in a few seconds, the woman, who was pregnant and didn't speak any English, jumped in Jennifer's truck and they took off.

Meanwhile, seven members of MPD were recognized for handling a terrifying situation following the 2015 Milwaukee Fireworks display on July third. Police say a 15-year-old opened fire hitting another teen who was barely breathing. Sergeant Melissa Franckowiak and the others dealt with a frantic crowd and began CPR to keep him alive.

"To have that kind of situation happen where there's so many people that you really just don't know what's going on, other than knowing that you have a body in the street and you have to piece it together," Sgt. Franckowiak said.

Unfortunately, the teen later died at the hospital. MPD want you to remember that officers do great things everyday, whether they're recognized or not. They don't want you to forget that.